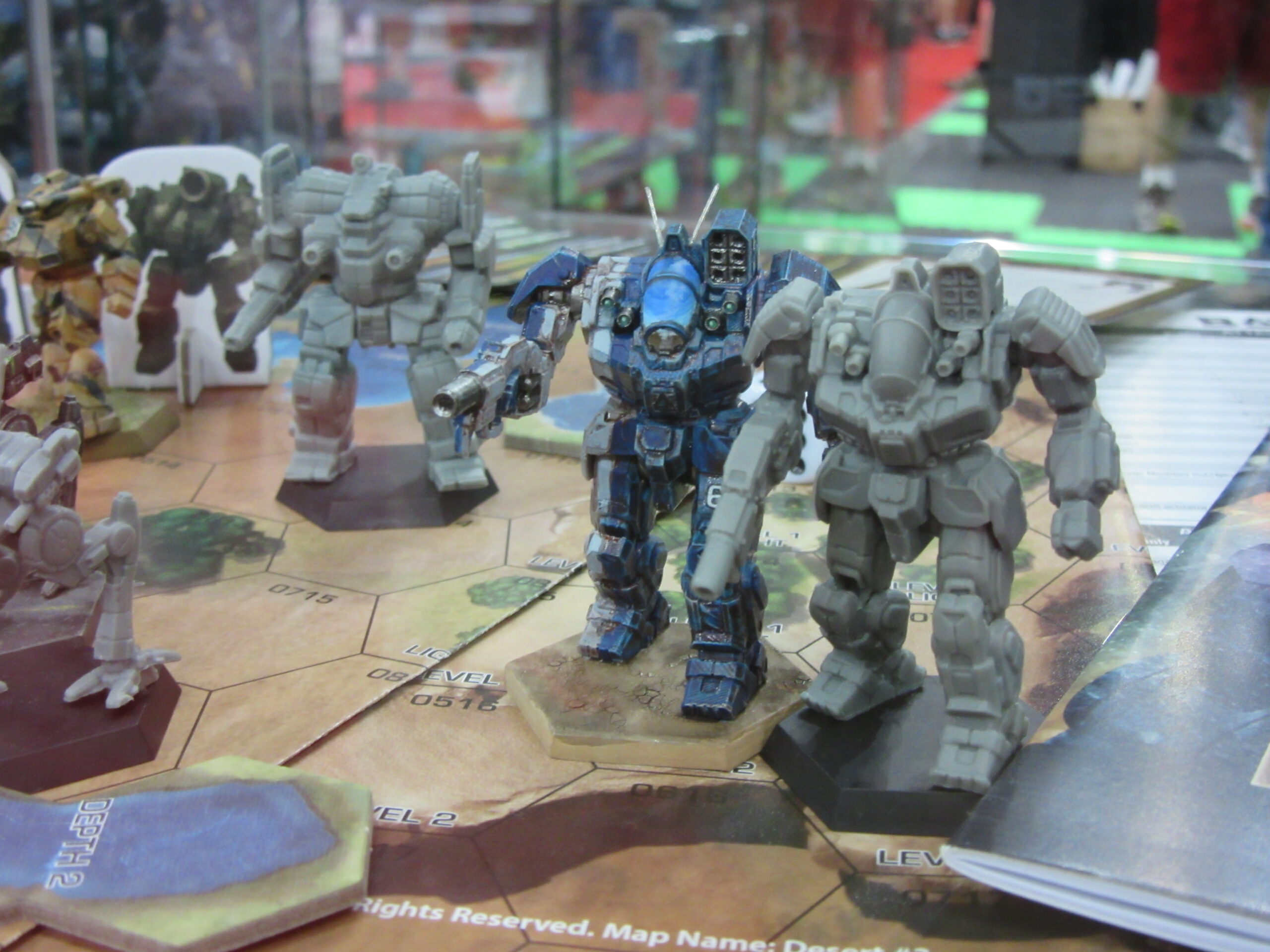 The last two days of GenCon were a whirlwind of activity.  As always, there was too much to see and not enough time to see it all.

Catalyst is giving BattleTech a makeover.  Not only are we getting new sculpts (that look great and a lot more like giant machines of war) but they’ve also spoken to their volunteers on how to best organize their new books to make learning the game easier.  The new version of Shattered Fortress is the first book to utilize this useability feedback.  Fans should keep their eyes peeled for the upcoming Alpha Strike: Commander’s Edition and Clan Invasion books.

AEG had a lot of great stuff to show off.  Fans of The Captain is Dead will be getting a “second episode.”  This stand-alone game finds our valiant crew imprisoned by aliens.  Like before, players will need to cooperate, using the special abilities of their characters to escape their prison.  The Captain is Dead: Lockdown gives us new characters to play and new wrinkles while using the core mechanics of a game you already know and love.  We also got a sneak-peek at Scorpius Freighter.  In this sci-fi dystopia, you’ll be smuggling needed supplies past totalitarian thugs with your hand-picked crew of experts, shuttling between three worlds to keep the hope of rebellion alive. Free League Publishing, which cleaned up at last year’s ENnie awards with their Stranger Things-like RPG, Tales From the Loop, teased their upcoming fantasy RPG with strong old-school roots.  Forbidden Lands is built for sandbox play where the players take a proactive role in deciding what sorts of adventures they want to have and eventually acquire the reputation and resources to build their own strongholds, taming a dangerous wilderness. Ravenburger showed of their tile-laying game Woodlands, where you’ll build paths for fairytale heroes to traverse a wood full of dangers and rewards.  Villainous looks like it’ll be a stand-out this holiday season, inviting players to take on the roles of Disney villains, each with their own agenda and resources, and each tossing obstacles in each other’s way as they pursue their own goals. Now that I’m safely away from Indianapolis, I can finally spill the beans on the other great Calliope Games projects I hinted at last time.  We’re getting a fun press-your-luck game about spies, and a cleverly balanced dice game in Everybody Loves a Parade.  But my favorite was the smuggling game Ship Shape.  In this game, you build a cargo from stacked tiles.  Each tile has cargo on it, as well as cut-out spaces allowing you to see what’s on the tile below.  Stack your tiles to maximize the return on your voyage without getting caught by the custom agents to win this very clever game from Rob “Betrayal at House on the Hill” Daviau. And there’s so much more to share with you!  I haven’t even touched on AEG’s elegant battlefield game War Chest, or the return of Vampire: the Masquerade, or Cubicle 7’s upcoming release of a “director’s cut” of Graeme Davis’ classic RPG adventure The Enemy Within, or the Starfinder Beginner’s Box, or…

Well, you’ll be getting deeper looks at all of these, time and fate permitting.  But before that, you need to hear about this year’s ENnie winners, and what the best in RPGs of the past year looked like.