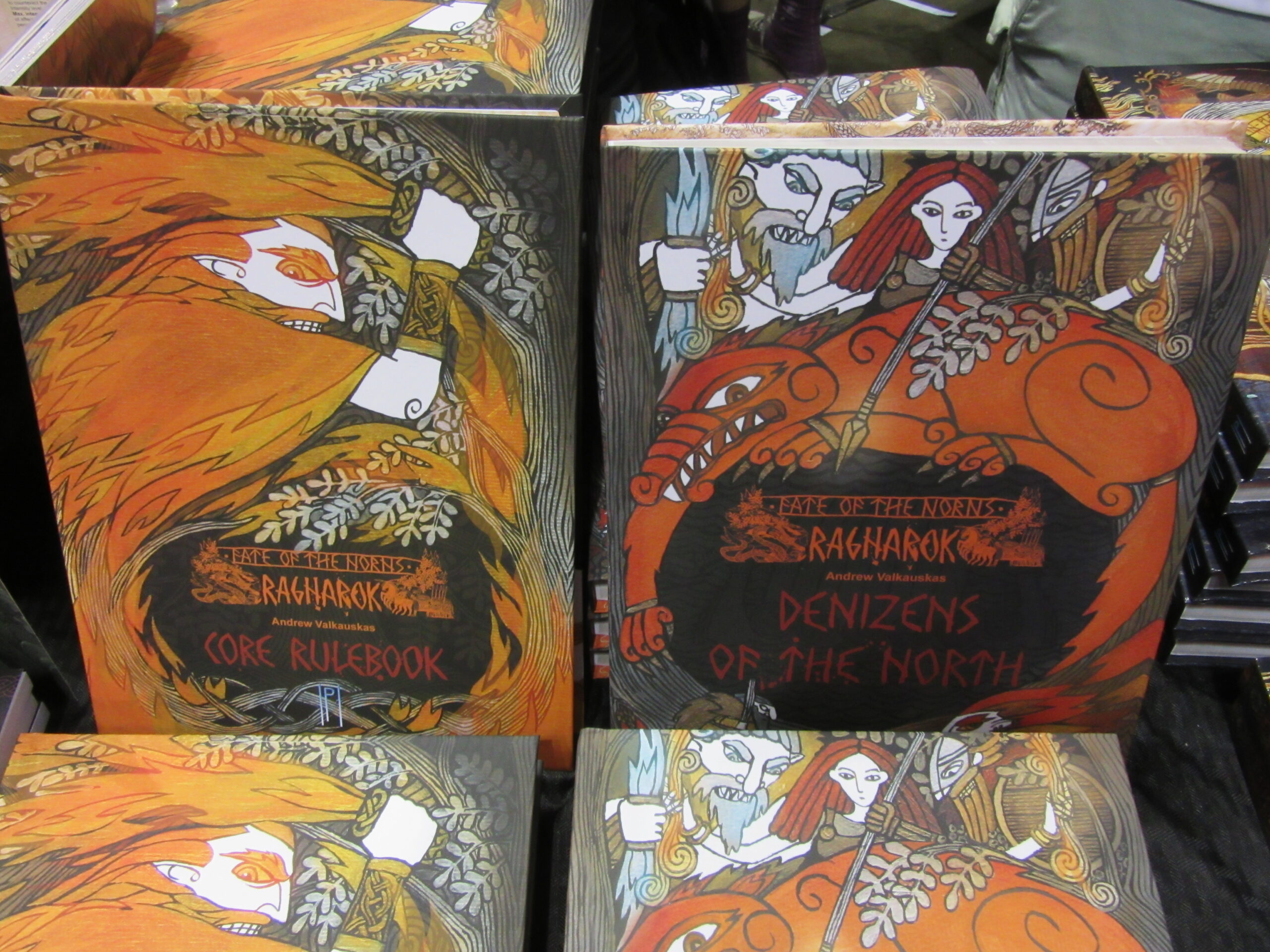 GenCon Day 2: So Much Teasing

The Dealer Hall on Friday was much more manageable than Thursday.  Which is not to so it wasn’t crowded.  A number of vendors told me that Thursday is the busiest day as people who really want that one cool thing show up to be certain they’ll get it.  This makes sense; even big companies like Paizo sometimes misjudge demand and end up selling out of a popular product on Thursday.

Your roving reporter on the scene breakfasted with the good folks at Paradox games to talk about the analog versions of their hit computer games Crusader Kings and Europa Universalis.  The physical components were various levels of not-final, so keep that in mind when looking at these pictures.  Crusader Kings fully captures the dynastic drama and political shenanigans of the computer game as you build your royal family into a powerful force to dominate the political landscape.  Europa Universalis has that slow, measured political ebb-and-flow you’d expect from the computer game, but with a lot more wheeling-and-dealing between players, giving it a hint of Diplomacy added to the world-conquest goodness.  We’ll be talking more about both games as they move through their development cycles. We could finally get close to the Pandasaurus booth to get a look at their original games.  Nyctophobia: the Hunted is a game you literally play blind.  You put on a pair of dark, black-out sunglasses and then feel your way across the tactile board, trying to escape from the killer hunting you.  Dinosaur Island allows you to run your own Jurassic Park.  Be sure not to skimp on security, or the attractions will munch on your customers, costing you valuable victory points. White Wizard Games has a new boxed set for Star Realms called Frontiers. This is a complete game-in-a-box, enough for up to four people to pay Star Realms at once.  It also includes solo options.  We’ll be talking more about this one later, but you can order it today.

They also were showing off an upcoming game called Sorcerer, in which spell-slingers of various lineages duel their way across Victorian London.  Card-based strategy sets you up for on-the-board tactics for a multi-tiered gaming experience.  More on that one later as it comes closer to general release. We also got to see Pendlehaven’s gorgeous RPG, Fate of the Norns: Ragnarok.  The sun and moon have been swallowed by giant wolves and endless winter descends up on the worlds.  You’ll roll no dice in this game; the core mechanic is based on pulling Elder Futhark Runes from a bag.  The mechanics are incredibly flexible, allowing you to create either a more story-based experience or delve into mechanically complex strategies.  Characters develop across a grid, allowing each to be unique, even if more than one character shares the same class.  And the art is stunning.  Ask the RPG experts at your local Dragon’s Lair Comics and Fantasy® for more about this game. Finally, we visited Calliope Games who focus on creating experiences for friends and family.  They showed off their new upcoming game, The Mansky Caper.  You’ll wheel-and-deal like gangsters in this push-your-luck heist game; “Someday, I may come to you ask you for a favor.  In the meantime…” They also had other cool surprises to share with us, but your roving reporter was sworn to secrecy before anything would be revealed.  Since I have no desire to sleep with the fishes, I’ll keep my lips sealed.  For now.