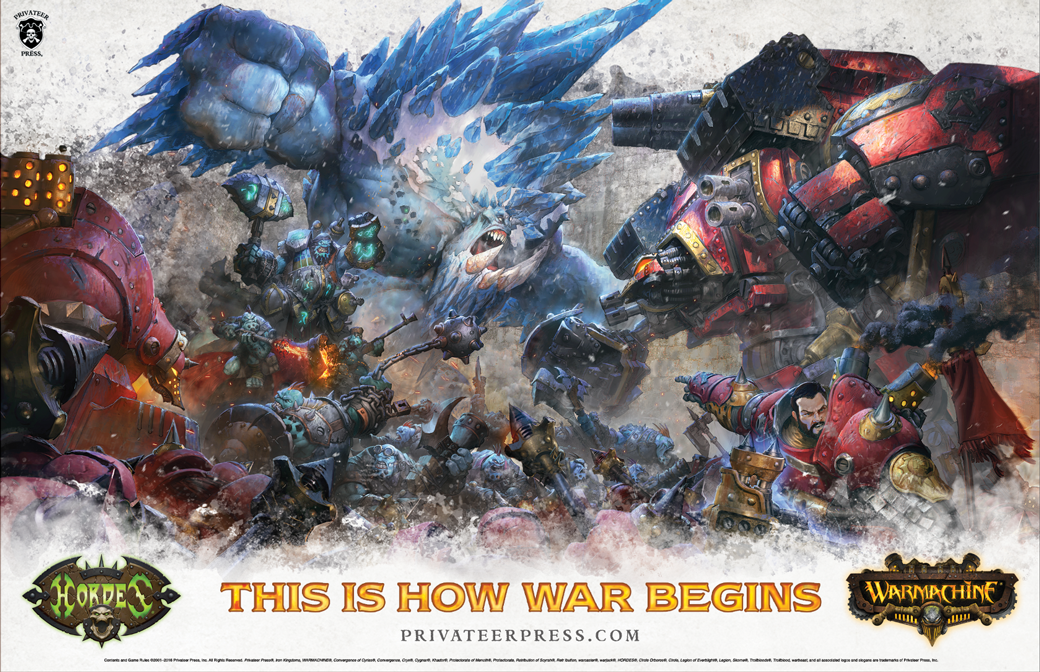 Get Ready for Warmahordes Mark III! Privateer Press is giving both Warmachine and Hordes the new edition treatment. Mark II (ie, second edition Warmahordes) came out six years ago, so it seems reasonable to do this now.

What can we expect? The official word from Privateer Press is a streamlined game that’s quicker to play and easier to get into. According to the scuttlebutt on the web, what we’re seeing is tweaks more than a complete overhaul of the game. Units will keep the same stats (though their scores may change) and the figures will still be sold with some assembly and painting required. Rumors say that many psychological components (fear and terror effects, for instance) are being watered down or removed entirely, you have to be entirely in terrain to receive cover benefits and the like, there’s no more distinction between light and heavy cavalry, and ‘jacks no longer snuff out if they fall into water. (That last was a neat bit of flavor that I never saw come up in a game, alas.)

I suspect we’ll see an effort to make warjacks and warbeasts more valuable as in-game assets. Perhaps they’ll have lower point costs or we’ll see larger point-bonuses for buying those among the warcasters and warlocks. We do know there will be a new battle box for each major faction that includes a war-noun and ‘jacks or ‘beasts equal to roughly zero points. Combined with increased point-totals, we could see a lot more flexibility in army lists for the game now.

The design team has had six years of competition play and fan feedback to assimilate into the new rules. It’ll be interesting to see where they take the game. The new versions of both Warmachine and Hordes will be available on June 29th. Faction decks will also be available, upgrading all your current models to Mark III.