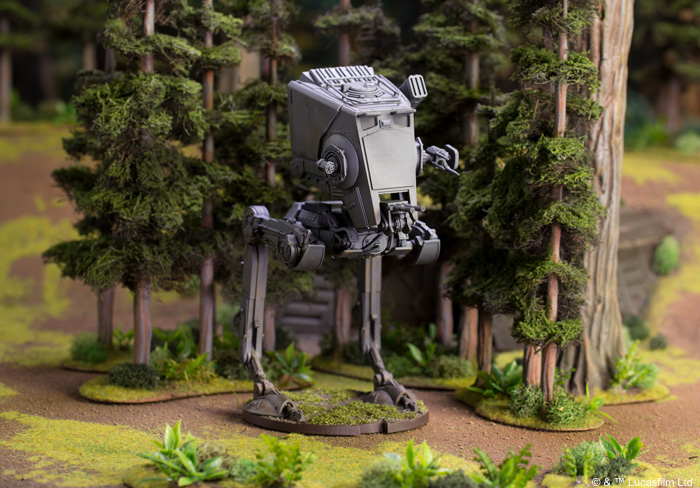 Ground Pounders in a Galaxy Far, Far Away Yep, the small-unit tactics and objective-grabbing action of Warhammer 40k and Infinity is coming to the Star Wars universe. And all with FFG’s usual flair, which means unit cards, articulated movement tools, and unique dice. The game was announced to much fanfare at the last GenCon, complete with demos. We got the chance to see it in action and the game looks good. If you’re a fan of Star Wars but generally avoid wargames due to the complicated rules and slow play, this is one to check out. Want to know what your unit does? Everything fits on a single playing card you keep right at the table. No juggling multiple books or cross-referencing charts. Want to blast some stormtroopers or Force-choke some rebel scum? Your card will tell you what dice to roll (they come in white, red, and black, with varying chances for success and special effects) and how many. The dice can return four different results: blank (nothing happens), hit, critical hit, and “surge.” Surges are special and what they do depends on the type of unit you’re using. Stormtroopers turn surges into extra hits when attacking. Rebel troopers turn surges into extra saves when defending. So there’s no comparing numbers or trying to remember if a 3 or a 4 hits; just count up your “hits” to see how much hurt you put on your foe. They’ll roll defense dice to counter those hits. It’s quick and easy and it keeps things moving. This makes the game feel like the fights in the movies, where you’ll see an AT-ST blast at some good guys and then you’ll see another band of good guys attack that AT-ST from the flank.

For those of you grognards with a few years of tabletop battles under your belts, let’s get into some nitty-gritty details. The game uses alternating activation by unit. That means I’ll move a squad of stormtroopers, then you’ll move Luke Skywalker, then I’ll move my speederbikes, and so on. Before the turn starts, we’ll both secretly pick and then simultaneously reveal a command card. Your command card has two important numbers on it. First is priority; if your card has the lower priority number than your opponent’s card, you get to go first. The second number tells you how many units you can give direct orders to this round. You give that many units command tokens and the rest of the command tokens go into a bag to be drawn at random. Of course, there’s a trade-off between how many direct commands your leader can give and how likely you are to go first. And each command card can only be played once. So you’ll be constantly balancing control of your army against the likelihood of moving first, while attempting to judge how important those same issues are to your foe at this stage in the game. The game is designed to play quick and simple, with the goal of resolving six rounds of fighting in less than two hours. They achieve this by keeping things as simple as possible. Again, there are no numbers to decipher or tables to reference, but instead you just count up the number of successes you rolled. Movement is probably a lot simpler than you’re used to as well. You measure from each squad’s leader, move the leader, and then arrange the rest of the squad around the leader as you wish, maintaining coherency. Is the enemy in range of your weapons? Measure from the unit leader. Are you within range to contest an objective? Again, measure from the leader. Of course, this also means that as a unit loses models in combat, the leader goes last.

This focus on simplicity carries over to other aspects of the game as well. Cover basically negates a single enemy hit. Morale is a token-based system where your units acquire suppression tokens that eat up actions or, if you gain enough of them, flee the table. One area where the designers interestingly opted for greater complexity is set-up. After you’ve arranged the terrain, you lay out a grid of nine cards by random draw. The top three are objectives which dictate how you win victory points. The middle three cards dictate how the opposing forces will be deployed. The bottom row are condition cards that modify the fight in some way, like limited sight distance due to fog or a hostile environment that makes it harder to shed suppression tokens. A mini-game allows the players to take turns removing cards from the grid until the final objectives, deployment map, and conditions are left.

In short, Star Wars: Legions is about making choices beyond mere positioning troops and target-priority. It’s full of opportunities to mitigate some circumstances at the cost of enduring others. Your plan will have to take into account the fact that, as commander of your troops, there will be a lot going on in addition to what the enemy is doing that you simply can’t control. The result is a game that will keep you on your toes and reward flexibility and improvisation. 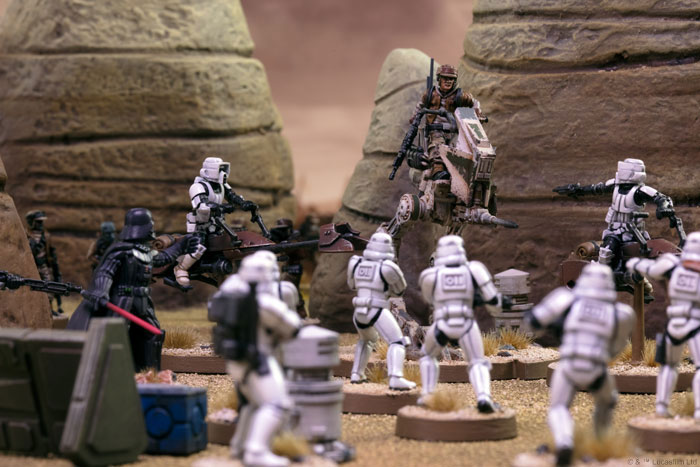