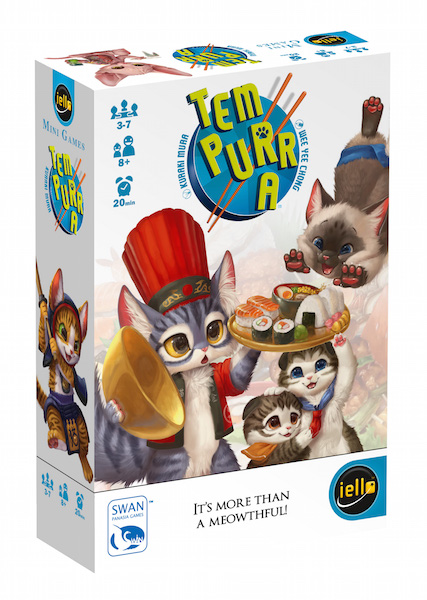 What is it about cute cats and Russian roulette? The pairing of these themes has come up a number of times in recent game releases. The latest of these, Tempurra, is a fun game for three to seven players that can be completed in a half-hour.

The goal, obviously, is to force the other players to draw lots of cards from the deck while not having to do so yourself. You’re aided in this by three types of action cards. One is, effectively, a wild card; drop it in place of a dish number you can’t match. Another action card reverses the flow of play. The final action card allows you to declare it’s any other player’s turn.

The more cards you have in your hand, the more options you have. But the only way to get cards is to draw them from the deck, risking an indigestion card. If you run out of cards, you’re forced to draw three. The game hinges on the risk-management of drawing and spending cards.

The art is adorable, full of big-eyed kittens interacting with food in various ways (a ninja-kitty slices up a watermelon; a sumo-kitten hefts a giant tray of sushi). It didn’t take long for our group to declare which cards were their favorites or make adoring noises over the card art. Even the indigestion card, with its overstuffed cat flat on its back, is cute. The cards are easy to read, with very good use of color. The action cards especially stand out with their bright yellow backgrounds, as do the red-and-green indigestion cards.

Our first game took nearly an hour to play, including explaining the rules and getting the cards shuffled. (You’ll be shuffling the thick, 95-card deck A LOT while playing this game.) But once we got the hang of things, turns went quickly, with players tossing down cards and forcing the turn order to reverse with gleeful vindictiveness. Tempurra is not the sort of game that will end friendships, but there’s definitely an element of forcing difficult choices on the other players.

Tempurra makes an excellent addition to your gaming library if you’re looking for something quick, fun, and cute. The box is small enough to fit in most purses. It’s labeled as being suitable for ages 8+ (kids will enjoy the cute pictures as much as adults, and the number-matching is easy to do), and for three to seven players (we played with five and had a great time with it). The 20-minute playing time seems accurate after your first game, with rounds going fairly quickly once players get into the game’s flow. For even faster games, start with all six indigestion cards in play.

Tempurra is brand-new from IELLO. Find it today at a Dragon’s Lair near you.