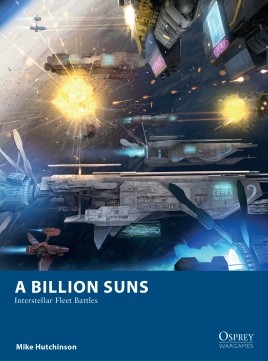 In the Grim Darkness of the Far Future, There is Only… Capitalism?

Since they launched their game imprint, Osprey has been knocking it out of the park with their wargames.  From Frostgrave to Gaslands, they’ve cemented their place with (relatively) rules-light fare that’s gamer friendly, inviting you to use models you already own (or, in the case of Gaslands, your favorite toy cars) in new ways.

Speaking of Gaslands, the author of that game, Mike Hutchinson, has a new game coming out in which starfleets made up of everything from tiny fighters to massive battleships clash in intense sci-fi combat.  The game, A Billion Suns, is unique in a number of ways.

First, it’s a wargame without army lists.  You’re the CEO of a large corporation in the distant future.  Thanks to the wonders of FTL flight and communication, if you really need another destroyer in the fight, you can requisition one.

That said, you’re also the CEO of a large corporation in the distant future.  Which means you need to answer to your shareholders.  If you’re profligate with company resources, like expensive destroyer-class starships, the board of directors is going to give you the old heave-ho.

So while you have planet-smashing power a your beck-and-call, you have to be judicious in how you use it.  And this means, unlikely nearly every other wargame on the market, you start the game with zero units deployed.

Individual games are built around missions, and the missions are built around a standard deck of cards.  You’ll draw three face cards to have three missions active, and use the numbered cards to mark your progress through the game.  When two missions are exhausted of number cards, the game ends.  To win the game, you must have a net-positive cash flow and the biggest profit shown.  You acquire profit by completing the missions, which can be things like rescuing escape pods, capturing corporate spies, hacking communication satellites, and slaying dangerous space kraken.

Things get stranger when you realize that some missions require their own board to play on.  That’s right, you could end up with three boards active at once!  Which means your ships could be hopping from board-to-board, scrambling between missions and attempting to counter your opponent’s moves.

You spend money by requisitioning ships to complete the missions.  Some missions require specific ship types (usually light and heavy utility ships) to complete.  But your opponent is going to try to keep you from completing missions by threatening your ships.  If your opponent is guarding those comsats with a corvette, do you need to bring in a monitor class ship to fight it off?  Or can you scare it away with cheaper bombers?  Keep in mind, you don’t need to destroy your foe’s ships to win, just force them to spend more money deploying ships than they make from completing missions.

As with many Osprey games, A Billion Suns is designed to work with whatever miniatures you have.  Since you measure from a center point on each ship (usually the pillar of the flight stand), you can use any scale minis you want.  The only real limit is getting them to fit comfortably on the play space you have.

The core of A Billion Suns is board-control and resource management.  It’s not about adjusting little power pips on each ship, but rather requisitioning fleets and countering your opponent’s moves while keeping your eye on the bottom line.  If you have some starship minis collecting dust that need a chance to shine, or you’re just interested in playing a truly unique wargame, hail the space cadets at your local Dragon’s Lair Comics and Fantasy® today about securing your copy of A Billion Suns today.