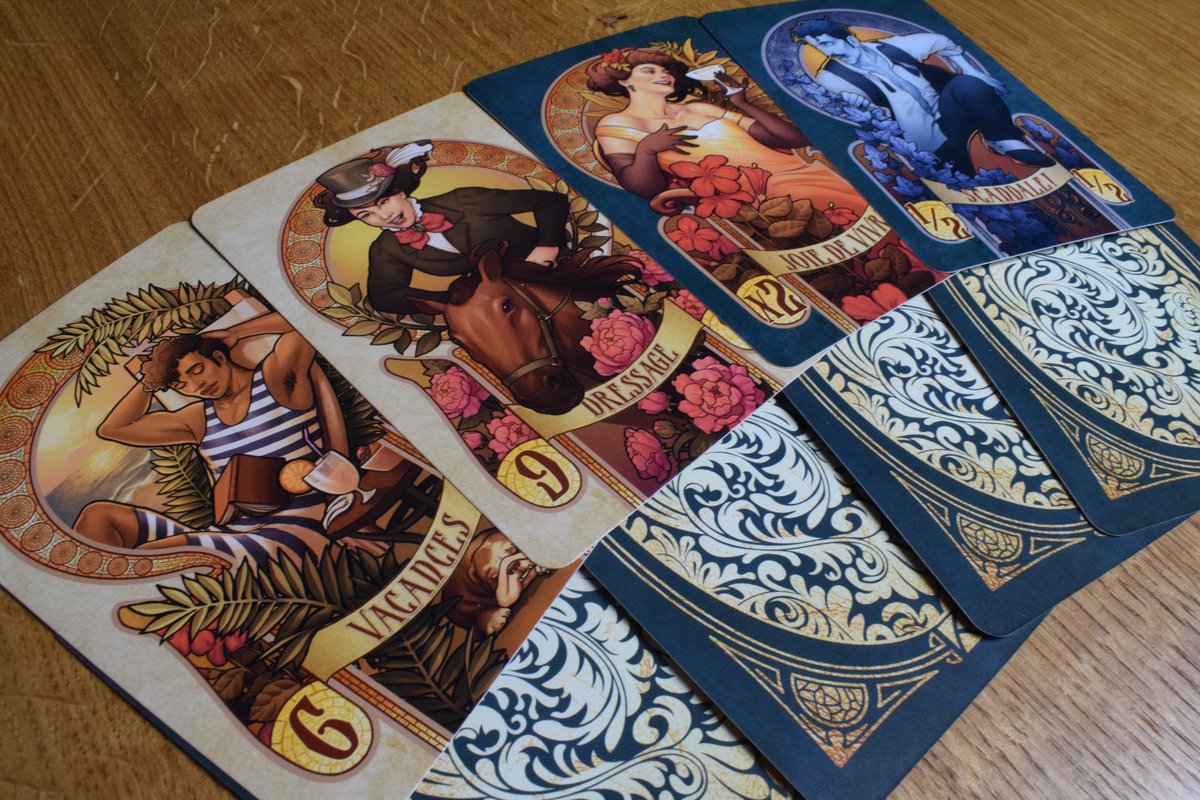 Living it Up with High Society

High Society is a classic bidding game recently re-released by Osprey Games. Its simple rules interact in complex ways to make each play unique and exciting.

Each player begins the game with a deck of 11 money cards, ranging in value from ₣1,000 to ₣25,000. Each player’s deck is identical to all the others.

There are also 16 large-sized Status cards. These are shuffled and placed face down. The player who shuffled the cards reveals the top card in the deck and, should they wish, places a bid on that card.

Ten of the Status cards are Luxury cards. These cards have a number in the bottom corners that represents its points value. The goal of the game is to have the highest score (but there’s a wrinkle we’ll get to in a bit). Players take turns bidding on the Luxury cards or passing. When it comes to your turn again, you can add additional cards to raise your bid, but you may not remove any cards from your bid. If you decide you don’t want to go higher you can drop out and return all the money cards you’ve bid on this Luxury to your hand. The last player with money on the table wins the auction and the Luxury card. However, they discard all the money cards they used to win the auction. All won Luxury cards are placed face-up in front of the player who won them. That player flips the next Luxury card and starts the bidding for it. The game ends when the fourth card with a green border has been revealed, without anyone bidding on that fourth card. But don’t count up your score just yet! Remember that wrinkle I mentioned above? Before players calculate their scores, they first total up the value of their money cards. The player (or players) with the lowest amount of money are cast out of high society and cannot win the game. The remaining players total up their scores and the player with the highest score wins the game.

High Society is a fun little game for three to five players lasting around 20 minutes per game. This makes it great for starting game night if you’re waiting for the rest of the gang to arrive or while a more complicated game is being set up. Because there are so few cards, it’s also an easily portable game for playing on-the-go.

The latest edition from Osprey Games sports beautiful art by Medusa Dollmaker in a lovely Art Nouveau style, perfectly capturing the decadence and frivolity of high society at the end of the 19th century and the dawn of the 20th. The box is small, easily fitting in any but the smallest purses and backpacks, and quite sturdy. If you’re ready to get your bon vivant on, don your high couture and a spritz of eau de parfum and make your way to your local Dragon’s Lair Comics and Fantasy® to secure your copy of High Society today.