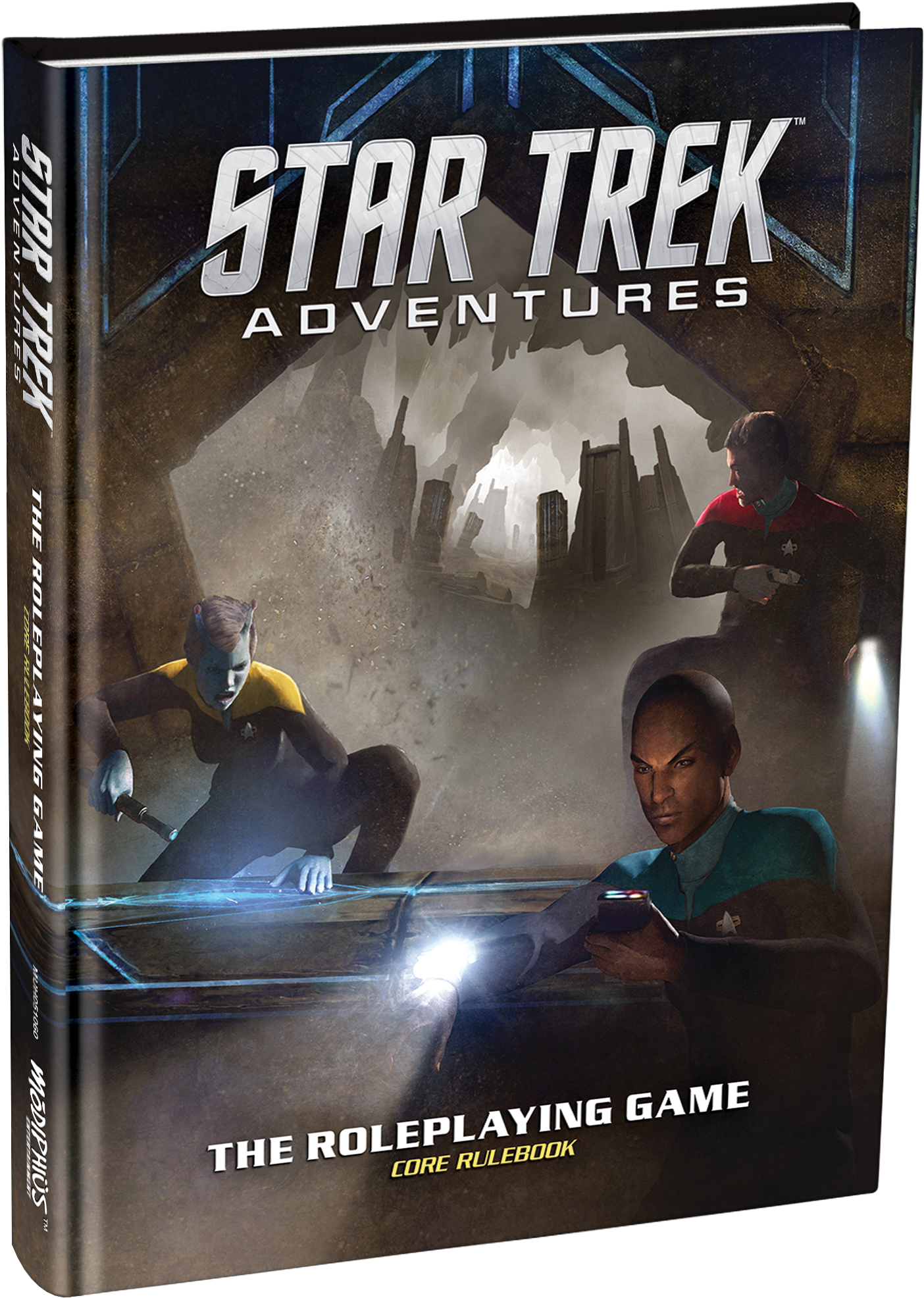 2017 has been a good year for sci-fi RPGing, giving us both Paizo’s Starfinder and Modiphius Entertainment’s Star Trek Adventures. The last time we had an officially licensed Star Trek RPG was way back in the 20th century, so we’ve been long overdue.

While anyone familiar with RPGs will find Star Trek Adventures a very comfortable fit, Modiphius has not been afraid to err on the side of fidelity to the TV shows. This shows up in a number of ways. For instance, it’s assumed you’re playing a Star Fleet crew member and character generation is done via a life-path system that takes your character from childhood through the Academy and into at least the beginnings of their career. The system allows you to create the sort of extremely capable characters you’d expect to see on the show, each on their specialized path in engineering, medicine, science, command, etc.

However, because you start the game with a highly competent character, you don’t see much in the way of advancement like you see in a game of D&D and Pathfinder. Just like on the TV shows, you might see a character occasionally rise in the ranks, but they don’t generally improve their technical skills in any noticeable way. Scotty and Geordi started out hyper-competent, and remain so over the span of their adventures. Likewise, your Star Trek Adventures heroes will enter the game as highly-skilled pros and might refine their competencies some, but are not going to become godlike beings of super-skill after a handful of adventures.

You see a similar adherence to the reality of the shows in how inherent traits and skills are used. Your character has six attributes: Control, Daring, Fitness, Insight, Presence, and Reason. Your character also has training in six disciplines: Command, Conn, Engineering, Medical, Science, and Security. The fun thing about these is that they are not forced into combos; instead, you can mix-and-match as you wish. For instance, when attempting to provide some medical attention, your character can combine their Medical discipline with either their Insight (“By golly, Jim, I’m beginning to think I can cure a rainy day!”) or their Presence (“There will be a moment of intense pain as I set the bone. Prepare yourself!”). The choice is entirely up to you and what fits best in a given situation. Even when you add in a Focus, which you’d think would be a narrower application of a Discipline, you can still combine them with the full range of Attributes and Disciplines as it makes sense to do so, without having your hands tied by the rules. Finally, there’s the characters themselves. While it makes sense to have each player play the traditional officers of the ship (captain, first officer, chief engineer, etc.) it doesn’t always make sense for all those people to beam down to the planet. In those cases, the rules make it easy for the players of characters left on the ship to play secondary characters. This allows everyone to stay in the game and makes it easy to have a traditional B-plot back on the ship, where the players of PCs who did beam down can take on the roles of other secondary characters. The rules even provide opportunities for these secondary characters to “level up” a la Miles O’Brien.

The default setting for Star Trek Adventures is vaguely near the end of TNG, the middle of DS9, and before Voyager. There are rules for modifying things to the TOS and Enterprise shows, so you can play in those earlier timelines as well.