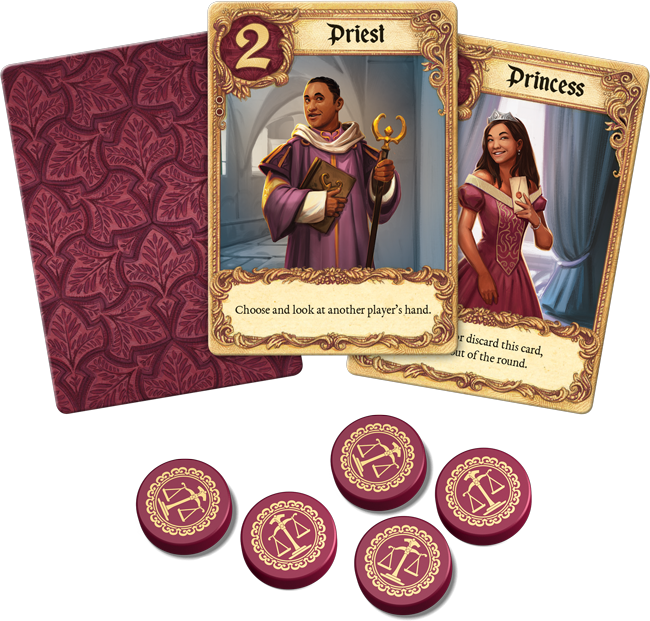 More Love Letter in the Bag

Love Letter made quite the splash when it hit stores back in 2012.  Since then, it’s been a favorite for its portability, simplicity, and just plain deductive fun.

The goal is simple: you want to be holding the highest value card after the deck is exhausted.  Each player starts with a card in their hand and begins their turn by drawing another. They then discard one of their cards and perform the action on that card.  Some let you peek at other players cards, exchange hands, or even knock other players out under the right conditions.

Once all the cards have been drawn from the deck (and the drawing player has played a card, reducing their hand to one again), everyone compares their remaining cards and the player with the highest value card wins a love token.  Then you reshuffle the deck, deal a starting card to each player, and begin again.  How many love tokens you need to claim victory depends on how many players you have in the game.

Z-Man Games is releasing a new edition of Love Letter, expanded with new cards and allowing up to six players to play.  Among the new cards is the Chancellor who allows you to draw two more cards right away and then discard back to one.  It’s a great way to speed up the game or find a better card if you’re facing certain defeat.  The Spy has a value of 0, but if you’re still in the game at the end, played a Spy at some point during the round, and you were the only one who played a Spy, you get a love token.  It’s a good way to sneak in a win, but it’s also a good way to convince everyone that you need to be taken out!

A full game takes about 20 minutes to play and the game still comes in a convenient little velvet pouch that easily fits in a coat pocket or a purse.  Expanding the game out to six makes it even better.  Now larger families or get-togethers can enjoy the game without anyone having to sit out, and it’s perfect for something to do while someone sets up a more complicated game.

If you haven’t yet added Love Letter to your gaming closet, or if you’ve enjoyed the game but chafed at the old four-player limit, or your copy is starting to show just how much you’ve enjoyed playing it, ask the good folks at your local Dragon’s Lair Comics and Fantasy® about the new edition today.