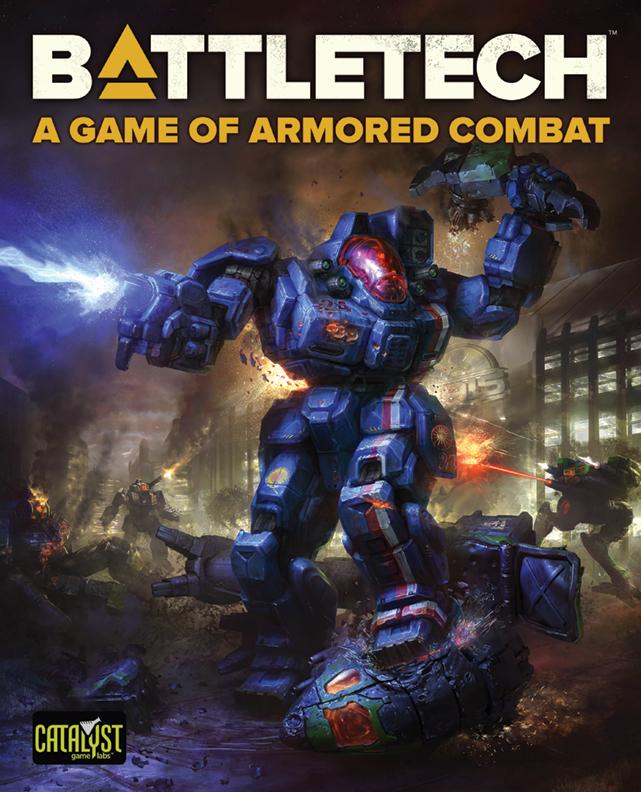 Giant robot wargames have come and gone, but BattleTech, one of the first, is still a force to be reckoned with.  If you’ve only heard about BattleTech, or played the computer games but never experienced the table-top game, Catalyst Game Labs has two (count ‘em: two!) new boxed sets for you.

The BattleTech: Beginner Box is for the absolute neophyte.  The rules are condensed down into twelve, full-color pages complete with diagrams and examples.  The rules are well organized for use at the table, and they’ll have you smashing up your first ‘mechs in no time.

Of course, you’ll need ‘mechs to smash.  The Beginner Box has two plastic mini ‘mechs (a Griffon and a Wolverine) and eight cardboard stand-up ‘mechs.  Now, if you’re used to the boxy and, in my opinion, not terribly pretty ‘mech minis of the ‘80s, you’re in for a treat here.  Catalyst Games Labs has redesigned all the ‘mechs for a sleeker, more military look.  Coming with them are nice little full-color stat sheets for each ‘mech, about a third the size of the old 8.5 x 11 black-and-white sheets we used to photocopy back in the day.  You also get playing-card sized cards that have the statistics and modifiers of the pilots you’ll be using as well.  Arenas for combat are provided by a double-sided paper map, with a grassy green plain on one side and a dusty desert on the other.

Among the non-gaming components, there’s also a short novelette set in the BattleTech universe (with a handy glossary in the back) and a brief outline of the political situation of the Inner Sphere.  It’s by no means a comprehensive treatment of a fictional universe that spans more than thirty years of table-top and computer games, but it is enough to give new players an idea of who the big movers-and-shakers are.

The rules you get are simplified from the core game.  There’s no separation of armor and inner structure (and so no critical hit rolls and all the drama those can bring), no tracking heat or heat damage, and no torso-pivoting.  The scenarios are likewise simple, focusing primarily on smashing up your ‘mechs rather than claiming territory or performing other sorts of missions.  The core of the game, however, the movement points and to-hit modifiers based on weapon types, range, and intervening terrain, those are all still in.  This means the Beginner Box will give you a solid foundation in the game.  If you like what you find here, you’ll absolutely want to move on to the full rules to be found in BattleTech: A Game of Armored Combat.

This is another box set, this time with eight plastic minis (fully assembled but unpainted), nine cardboard stand-up minis, twice as many pilot cards, a 24 page primer in the BattleTech universe, and the full, 48 page rulebook that does include things like inner structure and critical hits, heat management, torso-twisting, and rules for constructing custom ‘mechs.  In addition to the maps, you also get cardboard hex-clusters of terrain you can use to modify the maps.  The ‘mech stat-tracking sheets are back to the full-page design MechWarriors of old will recognize.  There’s also a handy, cardboard, two-sided reference sheet for quickly looking up all the modifiers and tables you’ll be using during fights.

The new maps take advantage of the advanced rules by adding in features like elevation, water, and roads, creating new opportunities (and hazards) for your ‘mechs.  The advanced rules also include punching, kicking, and jumping with ‘mechs, so even when all your guns overheat and your ammo cooks off, if you can still move, you’re still in the game.

The BattleTech game has been thrilling gamers since the mid-‘80s with its unique brand of tactical choices, resource management, and dramatic randomness.  The game includes decades of lore described in various games, supplements, and novels, and the rules encourage creating a unique, customized experience, inviting player creativity in designing your own mechs, pilots, and mercenary companies.  If you’re ready to do battle on behalf of the Great Houses or the Clans for control of the Inner Sphere, talk to the wargaming experts at your local Dragon’s Lair Comics and Fantasy® today!