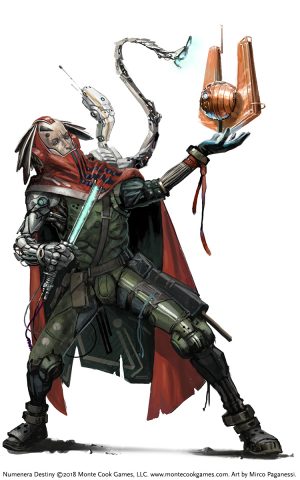 Numenera was Monte Cook’s first major foray outside the world of d20 RPGs and it gave us the Cypher System. There are two new big Numenera books heading our way, and they promise to shake things up! But not too much.

Charles Ryan, COO of Monte Cook Games (and a familiar face if you’ve ever gone by one of their booths at a con), says Numenera Discovery “can basically be considered a revision of the original Numenera corebook.” The writing has been sharpened to make it easier to understand, some of the rules streamlined, and even the familiar types of PCs, the Glaives, Jacks, and Nanos, have gotten a little polishing.

They also are not removing anything from the Ninth World, the distant-future Earth setting for Numenera, but they are adding new options. The second book, Numenera Destiny, takes the game beyond simply exploring the bizarre and alien mysteries that litter the Ninth World to actually transforming the world with those mysteries. The inhabitants of the Ninth World might not be able to understand how or why cyphers work, but that doesn’t mean they can’t use them to improve their lives and their communities. That’s where the new character type called the Wright comes in. Wrights have the ability to take a new resource, called iotum, plundered from the relics and cyphers left by previous ages, and craft things with them. What sorts of things? All sorts of things: cyphers (some from plans and others randomly thrown together from whatever parts they have at hand), community improvements like shield generators, and even vehicles.

This meant creating a whole new crafting system for Numenera. While the Wrights are the stars of that show, they’re not alone in utilizing it. If the players take up the challenge of building a better world, they’ll need all the skills and abilities they can muster to protect, nurture, and encourage their community to thrive.

Of course, every community needs its leaders, and the PCs are the natural choice. The new character type, the Arkus, is all about helping others achieve their greatest potential. Most of their abilities are about buffing others or giving them extra actions. The Monte Cook Games crew has added a new followers mechanic to the game, to represent NPCs who look to the PCs for leadership and inspiration. The Arkus, naturally, synergizes with these followers, making them, and the other PCs, far more than they’d be individually.

The goals for both Numenera Discovery and Numenera Destiny are not to replace the existing game, but to build on what’s come before. The game is still about exploration, but now it’s also about what effects that exploration has on the cultures and communities that exist in the Ninth World. The future of the distant future is in the hands of the PCs. What will they do with it?

Both Numenera Discovery and Numenera Destiny are available for preorder now. Ask the RPG experts at your local Dragon’s Lair Comics & Fantasy® about getting these books individually or in a combined slipcase set.