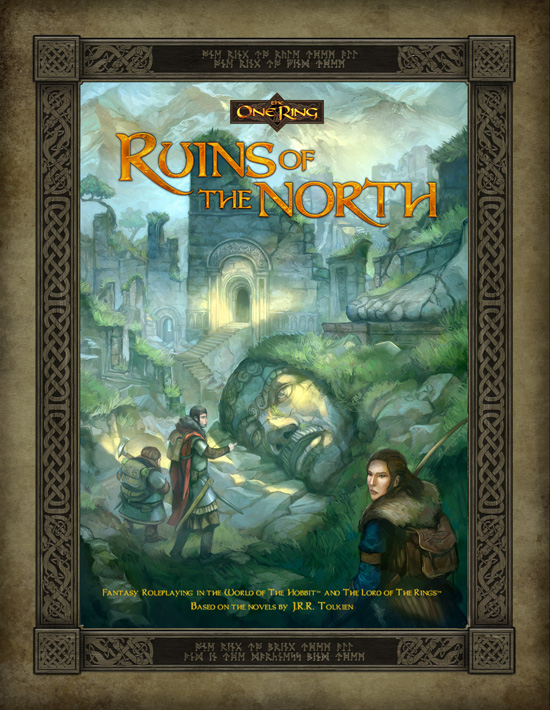 One RPG, Oops, no, Two RPGs to Rule Them All Ask the RPG experts at your local Dragon’s Lair Comics & Fantasy® about roleplaying in Middle Earth, and they can point you to two different games, both from Cubicle 7. Both are set in the time period between The Hobbit and The Fellowship of the Ring. The death of Smaug and the good will created between Men, Elves, and Dwarves after the Battle of the Five Armies seems to herald an age of peace, cooperation, and plenty. But Sauron’s power waxes. Shadows deepen in Mirkwood. The orcs grow in number and boldness. Darkness and despair seep, drop by drop, into the minds of the powerful and the wise.

In short, it’s the perfect time for adventurers.

Francesco Nepitello designed The One Ring RPG from the ground up to capture the spirit and flavor of Middle Earth. Traits like Valor, Wisdom, and Hope, as well as moral flaws, weaknesses to the corrupting influence of Shadow, describe the characters. Skills are divided into six categories: personality (with skills like Awe and Persuade), movement (including Travel and Stealth), perception (which covers the Search and Insight skills), Survival (that includes Healing and Hunting), custom (including the very Tolkienesque skills Song, Courtesy, and Riddle), and finally vocation (which includes Craft and Lore).

When attempting an uncertain action, players roll a twelve-sided Feat die and a number of six-sided Success dice equal to your skill level. You’re trying to roll a high enough score to beat a target number (which is frequently a 14). The Feat die has two special figures on it. One is the Gandalf Rune and if you roll that, it’s an automatic success. The other special symbol is the Eye of Sauron. Roll that and not only does it count as zero towards your total roll, it also means another special complication has occurred.

The sixes on the Success dice also bear the Tengwar rune. For every one of those you roll, you increase the level of success. However, the 1, 2, and 3 are hollow because you don’t count those numbers if your character is Weary (usually because of lost Endurance due to combat or too much Fatigue from travelling).

Combat doesn’t rely on the traditional Hit Points mechanic you see in most games. Nepitello instead chose a mechanic based on conditions and wounds:

Reading the books you definitely get the impression that a traditional ‘hit points’ mechanic cannot work if you want the game to feel ‘Tolkienesque’; heroes either survive combat relatively unscathed, or are ‘wounded’. Getting wounded sounds relatively innocuous – all you need is to protect yourself after all – but this idea lasts until you receive your first Wound – suddenly you wake up and feel vulnerable, exactly as I guess it must feel when you get smitten by a sword in the heat of a battle!

While much of the game involves encounters and journeys (which have their own rules that revolve around logistics and finding your way through the sparsely inhabited Wilderland), there are also rules for downtime activities called the Fellowship phase. This is where heroes heal up from physical and spiritual wounds, meet with patrons and collect rewards for their exploits, and possibly level up. The Fellowship phase also moves time forward. The One Ring is built around a dynamic setting, the passage of years transforming the world very much as it does in RPGs like Mouse Guard and King Arthur Pendragon. The RPG texts themselves are lovely, full-color and illustrated by artists like John Howe and Jon Hodgson. The game is well supported with lots of adventures and gazetteers covering well-known locations like Mirkwood, Rivendell, and Rohan. And later this year we’ll be getting a boxed set covering the Mines of Moria!

The other RPG, Adventures in Middle Earth, is designed for D&D 5e. Yep, if you ever wanted to test your paladin’s mettle against the Balrog or a barrow wight, you can totally do that. But that is a tale for another day…