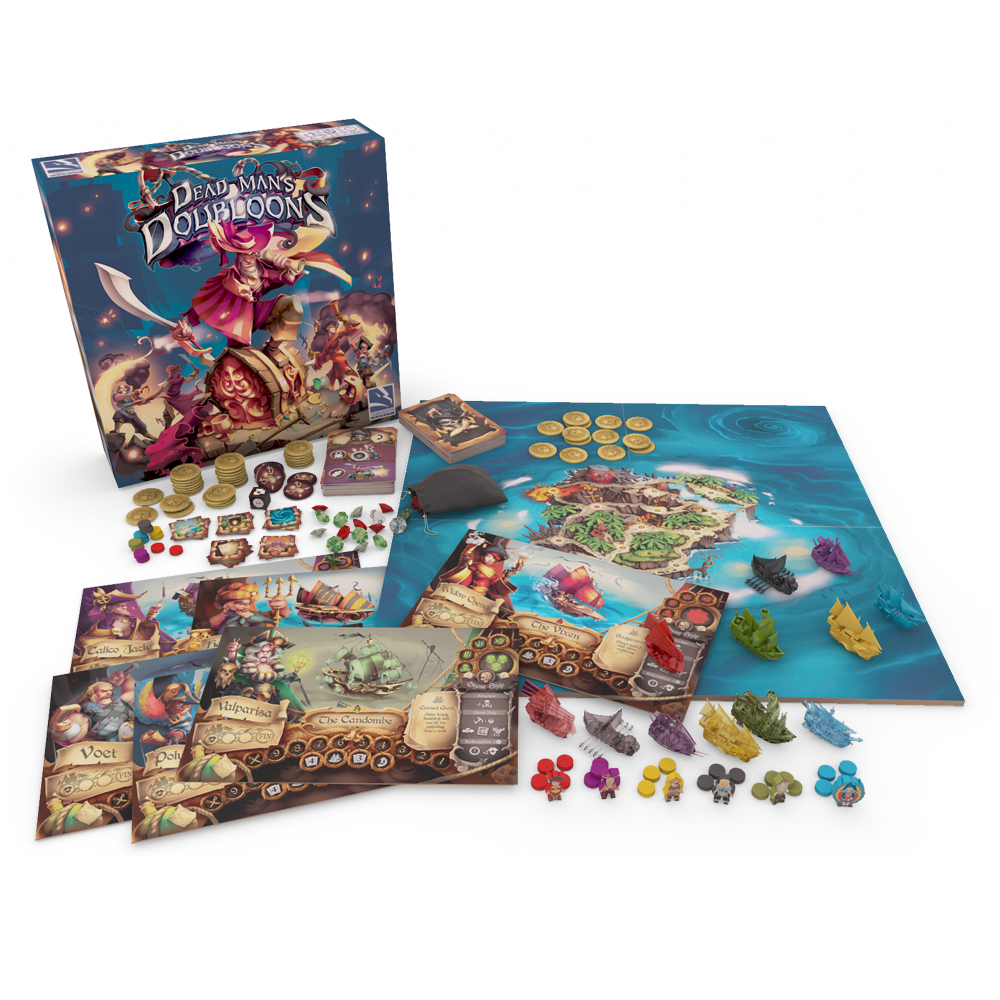 Racing for Pirate Treasure Against the Quick and the Dead Dead Man’s Doubloons from Thundergryph Games pits pirates against each other in a race for the buried treasure of Zotètmon Mountain. Players start with a ship, a captain, and a handful of command cards which they simultaneously lay out and reveal. Players then perform the actions on their cards in turn order. The board represents an island full of hidden treasures and dangers, and the seas around the island. The ship commands include things like sailing around the island or turning about, shooting at the other ships (facing matters, so make sure your ship is pointed the right way before opening fire) and raiding your opponents’ ships and the island for treasure. Each card includes one movement action (which may or may not be optional) and two other actions, from which the player gets to pick one.

While all of this is going on, the captains of the ships are on the island, attempting to acquire map fragments so they can get to Zotètmon Mountain and claim its treasures. Once a captain has two map fragments (claimed either by card action or stealing from the other players) they can start on one of three paths across the island to the treasure. One path is short and dangerous, one is longer, but safer, and the third is even longer but allows for more opportunities to collect other treasures on your way to the Mountain.

A player might choose the longest path because there are multiple types of victory-point resources in this game. The most straightforward is treasure, and the biggest treasures are the jewels of Zotètmon Mountain. But those jewels are drawn at random, so there’s no sure way to know exactly how big a score you’re going to get from being the first captain to the Mountain. You can also win renown by doing things like sinking your opponents’ ships.

Sunk ships are not out of the game. Instead, they return to the board as ghost ships (represented by translucent versions of the normal ship pieces) and while they are limited in their actions, they can still earn renown and scoring treasure. With enough treasure, you can buy your ship back to life!

Once a captain has reached Zotètmon Mountain, everyone retreats back to their ships, new cards are added to the deck of actions, and the deck is reshuffled. This begins a no-holds-barred battle between the ships to snatch as much treasure from each other as possible before the actions run out.

Once the game is over, everyone counts up the points. Ghost ships earn fewer points from treasure, so while it’s possible for the captain of a ghost ship to win the game, it’s certainly harder to do. The captain with the most points wins the game.

Dead Man’s Doubloons requires you to balance both the ship-action and the progress of your captain to secure victory. There’s always something going on with every action by the other players changing the situation on the board and giving you things to react to on your turn. The game is for two to six players and typically lasts for 45 minutes. Ask for it at your local Dragon’s Lair Comics an