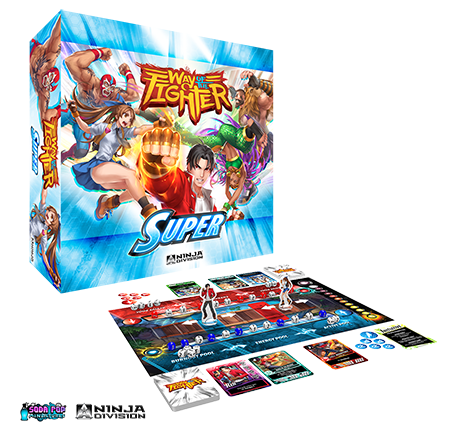 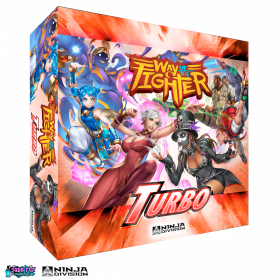 Are you ready for a little smack-down, grapple, and power-blast action? Looking for a little one-on-one dueling or are you a fan of computer fighting games but wish they were a little less twitch-focused? Ninja Division’s Way of the Fighter is for you.

Computer fighting games have been with us since the ‘80s and have developed their own themes and clichés over time. Way of the Fighter embraces those as it brings the fight to your kitchen table. You’ll utilize stances and different fighting techniques to overcome your opponent, who will be looking to neutralize your attack and turn the tables.

The first thing you’ll do is pick a fighter. The two big box sets, Turbo and Super, each come with five fighters to choose from. Each fighter comes with a deck of cards that represent their unique moves based on fighting styles like chi, wrestle, or fluid. After you’ve chosen your fighters, you’ll set up on the board, placing each fighter in their colored starting spot on the lane, and setting up your Core Dice (white dice numbered 1-3) and your Power Dice (colored dice numbered 2-4). These dice both measure your health as well as power up your abilities.

Fights go 12 rounds, each round broken into three phases: the Ready phase, the Challenge phase, and the Recovery phase. You’ll start with five cards in your hand that include your fighter’s block action. In the Ready phase, you’ll draw one card or discard three cards and draw three cards. You’ll activate two Core dice or one Power die by moving them to the appropriate pools (from Burnout to Energy to Active). Then you’re ready for the Challenge phase, where you’ll pick a Command (Kneel, that lets you move another Core die from your Burnout to Energy pools), Shift (that allows you to also move forward or backward one space and draw a card) or Leap (that allows you to move two spaces forward or back). Both players choose an action card from their hand and place it face down, and then roll as many of the dice in their Active pool as they wish. Then both players flip their cards over.

Action cards have a grid at the bottom that shows what the relative positions of the fighters need to be for the card to resolve. If the card can’t resolve, it’s cancelled. If both actions are possible, the players total the roll on their dice with their actions Priority number (in the upper left). The highest total goes first. If the first player does at least one point of damage to their opponent, or the action chosen actively cancels their opponent’s action, then the other player’s action is cancelled. So you really want to go first if at all possible.

But if your action happens, you might be able to chain actions, allowing you to wallop your foe repeatedly! And that might require that you keep dice in your Active pool to power that action up, since any subsequent action must have a Priority + dice score equal or greater than the previous action’s.

This of course sets up a conundrum for players: risk holding back some dice for a chain of powerful attacks, or go all-in in order to ensure you get to act at all?

The Recovery phase has you discard down to eight cards, return dice to the Burnout pool (except dice used in a Block action which go back to the Energy pool), and sets up for the next round. Keep playing until one fighter is KOed (reduced to no life points) or you finish round 12, at which point the character with the most life wins. That’s the basics, but the game includes all sorts of fun wrinkles. Some actions put blast markers moving across the board, denying certain spaces to your opponent and dealing damage if they connect. Each fighter has special abilities as well; some add dice to their Energy pool when they get hit. Others add +1 to the Priority of certain types of actions. This gives each character a unique flavor and makes them favor certain actions during a fight. And there are condition cards that can be played during a fight that change or deny certain actions to your character.

The game also includes a deck-building aspect. Each character has certain styles they can perform, allowing you to grab cards from other decks with those styles to mix things up. Finally, you can play a four-play game with tag-team rules.

With lots of different characters to pick from and cards to build your deck with, Way of the Fighter includes a lot of replayability. Once you get the rules down, a one-on-one match will generally last 40 minutes. The pieces really do bring to mind arcade fighting games, with their cartoon fighters, signature moves, and brutal combos. If you love deck building games, outmaneuvering your opponent with an unexpected action, or just want the back-and-forth gameplay of a fighting arcade game at a more cerebral pace, ask the good folks at your local Dragon’s Lair Comics and Fantasy® about Way of the Fighter Super or Turbo today.