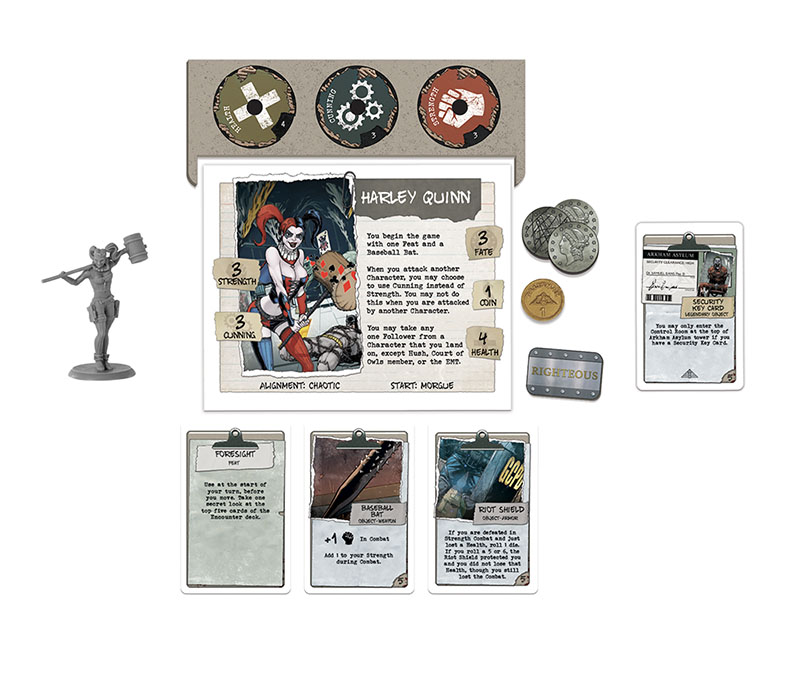 2019 is the 80th anniversary of Batman appearing in Detective Comics (or DC as they’re more commonly known today).  So you’re going to be seeing Batman everywhere, including the not-quite-so-venerable Talisman game.

For those of you not familiar with Talisman, it’s a roll-and-move adventure board game from Games Workshop, the same folks who gave us Warhammer 40k.  Traditionally, Talisman takes place in the Warhammer fantasy universe, but there have been numerous editions over the years.  Now, The OP is bringing us Talisman: Batman.

In traditional Talisman, you move around the board with an RPG-like character who has stats, abilities, and gear you can upgrade.  Your goal is to be the first to the center of the board, which is divided into three rings.  Each ring closer to the middle is more challenging, so you’ll want to level up your character before hopping to the next ring.

Talisman: Batman takes place in Arkham Asylum, and each player chooses one of the prison’s notorious occupants to be their character.  Each character has their own special abilities, and you’ll all be trying to reach the control center of the asylum.  Once there, you can release all the inmates and rule as the Queen or King of Arkham.  The rogue’s gallery of possible characters includes the Riddler, the Penguin, Clayface, Harley Quinn, Ra’s Al Ghul, and Poison Ivy.

The game also includes a Batman figure.  The 1-face on the movement die has the Batman logo on it.  If you roll that, you can move Batman, hopefully in such a way that he’ll interfere with a rival player’s movement towards the center of the board.  The first character to reach the control room must face Batman and overcome him in order to win the game.

Traditional Talisman can take a whole afternoon to play, with games frequently clocking in around six hours.  Talisman: Batman offers lots of ways to speed up the game, including cards that allow players to bypass guards or navigate through the ventilation system.  This allows the game to be a lot shorter, typically clocking in at less than two hours.  Up to six can play, making it a great game for larger groups, and with more players rolling, you’re more likely to get those 1s that allow Batman to be more involved.

If you’re a fan of Batman or Talisman (or if you’ve never played Talisman and you’re curious what all the excitement is about), you’ll want to check this game out.  The artwork is from the “New 52” comics and the board has gritty, sepia-toned art to set the mood.  If you’re ready to break out of your padded cell and claim the crown as Gotham’s criminal overlord, ask the friendly folks at your local Dragon’s Lair Comics and Fantasy® about Talisman: Batman today.