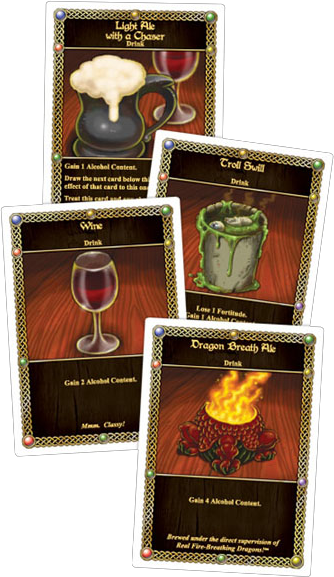 Save Game Night with These Last-minute Heroes

It happens to the best of us; hours before your RPG session is set to start, life intervenes and players need to cancel. Without a quorum, the decision is made to postpone the campaign until next week (“We’re not heading into the Skullmountain Caverns without a paladin!”). But what to do with the players who are still free to have fun tonight?

Here are a handful of options to rescue your night and entertain your friends:

The Classic
The Munchkin card game is the barest essence of the classic dungeon delve: kick in doors, slay monsters, and collect loot. You’ll build your character through the cards you collect, and betray your friends by dropping curses on them or buffing the monsters they’re facing up against. There’s a small mountain of variations published by Steve Jackson Games, so whether your itch is sci-fi or steampunk or whatever, there’s a Munchkin deck to scratch it. If you’re wanting something a touch more serious and less tongue-in-cheek, Catalyst Games has published Dragonfire. This deck-building card game based on D&D is a cooperative challenge, essentially replacing the DM with a deck full of challenges and treasures. Dragonfire cards increase the difficulty of the game by changing the rules, and some cards have extra effects depending on the level of the Dragonfire cards currently in play.

For fans of Pathfinder, Paizo has the Pathfinder Adventure Card game. Also a cooperative experience, you can tackle classic Adventure Paths, recreating those epic moments faced by Pathfinders of yore. For Storytellers
If RPGs are all about telling stories with your friends, you might prefer something like the Gloom series from Atlas Games. You’ll use clear overlay cards to add tragedy to members of a doomed, Gorey-esque family, trying to create the saddest tale of all. If your group is the sort that can’t pass up rolling on a carousing table, they’ll love Slugfest Games’ The Red Dragon Inn. Each player takes on the role of an adventurer just returned from a quest, coin-purses heavy with gold. Each adventurer has a unique deck of cards they can play during the game, as well as a counter that marks both their endurance and their inebriation. Players will take turns playing the cards in their hand and giving each other drink cards. If your inebriation level is ever greater than your endurance, your character collapses drunk and is out of the game. If you ever run out of gold, your night is over and you’re out of the game. Last character standing wins. The characters are fun, the cards are funny, the art is excellent.

Life happens, and sometimes it happens on game night. To be best prepared when adversity rolls a crit, talk to the good folks at your local Dragon’s Lair Comics and Fantasy® today and discover your options to save game night!