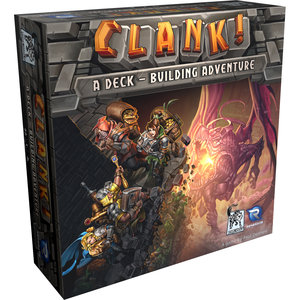 Luckily for us, the dragons at Dragon’s Lair Comics and Fantasy® are the friendly sort who won’t maul you for stopping by and purchasing their treasures. Luckily, I say, because among those treasures is a game called Clank!: a Deck-building Adventure.

In Clank! you and your friends take on the roles of dungeon explorers and burglars attempting to purloin a dragon’s treasured artifacts. At its core, this is a deck-building game where you use Skill to buy cards. Cards can also give you Swords, to fight off the monsters of the dungeon, and Boots, which allow you to move around the board.

There’s also a push-your-luck element to the game. Some cards give you Clank! which means you’ve made noise that might draw the attention of the dragon. For each point of Clank! you get, you add a colored cube to a pile on the board. (There are ways to remove cubes from this pile as well.) At the end of each player’s turn you refill the slots of the face-up dungeon deck where the players can purchase cards for their hands. If any of the new cards have a dragon symbol on them, the dragon rouses and has a chance to unleash its righteous fury on sneaky little thieves like you! (Hey, did you think we at Dragon’s Lair Comics and Fantasy® were going to be unbiased in our opinions where dragons are concerned?)

All the colored Clank! cubes are dropped into the dragon bag, where there are already a number of black cubes. You then draw blind a number of cubes equal to the dragon’s current Rage. (Rage is dictated by how many players are playing as well as the number of artifacts and eggs that have been stolen so far.) Black cubes are discarded. Colored cubes are damage to their player’s burglar. Take enough damage and you die.

The first player to return home or die outside the dungeon with an artifact starts an end-of-game timer that also results in more dragon attacks. When the game finally ends, everyone counts up their points from treasures and gold swiped and cards in their personal decks to see who won. Because of the push-your-luck element to the game, Renegade Game Studios’ Clank! a Deck-building Adventure offers multiple strategies to victory, depending on how much you want to push your luck. The game can be played solo or with up to 4 players and takes about an hour to play. There’s also Clank! Sunken Treasures for those who don’t mind getting their feet wet and Clank! In! Space! for those who prefer sci-fi over fantasy. Pick the perfect Clank! as a gift for the gamer in your life today.