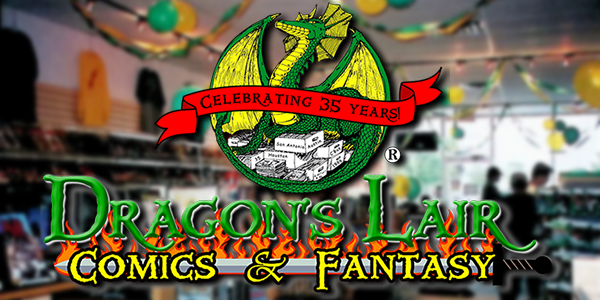 A little over 35 years ago I walked up to my very good friend Mandy in a library on campus and asked her, almost out of the blue, “So, how much do you think it would cost to open a comic bookstore?” and watched her stunned reaction. Then I turned around and walked off, chuckling evilly to myself.

A few months later, in June of 1986, together we attended a local comic book convention and started letting people know that we would be opening soon. And, after far too little research, funding, or business knowledge, Dragon’s Lair Comics & Fantasy ® opened its doors on September 3rd of 1986.

In the early years I attended college as well as running the store, which did not a benefit either my budding career as an entrepreneur or as a college student. It ended up taking me five and a half years to earn a four-year degree, and longer than it should have to get the store to a stable place.

In the 1970s and 1980s people who played board games, roleplaying games, and read comic books were not highly regarded by much of our community. Those things that we loved and thrilled in were disparaged by many of those that we grew up with. So, when I opened the store, one of the founding principles was building a community and a place where people could come and know that what they loved was appreciated and that they were appreciated.

The early years were very much a group activity. My friends from college helped with numerous hours of volunteer labor. The statute of limitations having expired, I can say that I lived in the back of the store for about six years (consider this an early version of a “mixed use development”, if you wish 😉). Many of my first customers became close and longtime friends and still are today. Without their support the store as it is today would not exist.

When we first discussed the logo, it was suggested that the dragon have a somewhat goofy face. I rejected that because I felt it should have a visage that showed that it is proud of its treasure of comics. If you observe its attitude, you will see that it projects an image that is strong and firm, and not apologetic to anyone for what it loves and protects. And though it visually safeguards its hoard, it also was meant to represent a sheltering presence for myself and for my customers, and to tell those who denigrated what we valued that we were unbowed and unapologetic.

It is very humbling that we still have people with us who started shopping with us back in 1986. It is very true that I, the owners, and employees of all the stores are only here because of the support that those customers, and all those who have been with us throughout the years, and that *you* reading this now have given us. While some of that support is financial, much of it has been in sharing our love for our shared industry, being empathetic and mourning with us when a shop cat has died, or on those fortunately few sorrowful occasions that have come to our Dragon’s Lair Comics & Fantasy ® family.

When in the early 2000s life took me to New Mexico for a few years before I was able to return to my beloved Austin, I began franchising stores. One of the things that I always tell potential store owners is that owning a store is a vocation as well as a business. Yes, you can make money doing what we do, but if you only want to make money you should do something else. You really must love what you are doing, the people who are coming into your store, and what you are selling to do well. If you want to open a store for the money, rather than for the joy of working with people who truly are excited by the same things that you are excited about, well, you should go and open a pretzel shop instead.

Today I am very fortunate to work with the owners of several stores: Angie and Jason in Austin; Robert and Christine in Houston; Gil, Rose, Raul, and Estrella in San Antonio; and Phil who is opening the newest store in Columbus Ohio. They all share our love of comics and games and are dedicated to providing inclusive and professional stores for us all to enjoy.

Now, as we enter our 35th year in business, we have had many successes. We have hosted numerous guests over the years, including George Takei, Nichelle Nichols, Neal Adams, Felicia Day, and numerous others. We have been honored to be the recipient of numerous industry awards and local recognition in several cities. We have been extremely fortunate and weathered many storms with the help and support of our friends and customers.

What I hope that you know, you who read these words and have shared our journey, is that the greatest joy and grace that we have received is our opportunity to connect with each of you and share with you our mutual love of comics and games throughout the years. Whether you have been with us since 1986 or have just walked through our doors for the first time, I know that I speak for all the store owners, their employees, and most especially for myself when I say, with all my heart, Thank you. I am grateful for you. I’m so very glad we share a joy for these stories and characters, whether we read them or tell them in roleplaying games, or by playing board, card, and miniature games. I hope that with your support, laughter, and enthusiasm, the stores will be here for you for 35 more years and that you will find us worthy of your continued support.

And, most importantly, that within these walls you will find a place where you can be yourself, be accepted, and find joy with others.

With the greatest sincerity and gratitude,