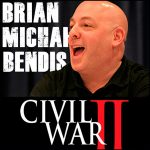 The Man at the Center of the (New) Civil War

Brian Michael Bendis is a powerhouse in the world of mainstream comics today. He’s been Marvel’s pointy-tip-of-the-spear in their Ultimate line. Beginning with Ultimate Spider-Man in 2000, he’s gone on to write Ultimate Fantastic Four, Ultimate X-Men, Ultimate Origins, Ultimate Six, and Ultimate Marvel Team-Up (in which your friendly neighborhood wall-crawler teamed up with just about everyone who’s anyone in the Marvel ‘verse).

But it was a long road for Bendis to get to the point where Marvel would entrust him with writing their biggest projects, like Secret War. Bendis’ career has been a fine example of the adage that those who want to write (or draw) comics should get started by just doing it.

From the age of 13, Bendis knew he wanted to be involved in comics. His early 20s were filled with submissions to the big publishers in the comic business. None of them were interested. He made ends meet by being an illustrator for Cleveland’s newpaper, The Plain Dealer. In ’93, he began publishing his own crime-noir comics through Caliber Comics. Todd McFarlane became a fan and soon Bendis was working on the Spawn spin-off title Sam and Twitch. While at Image, he also co-created and wrote the crime-noir/superhero mash-up Powers.

During this time, a friend brought his work to the attention of Joe Quesada who was working for Marvel at the time. Quesada, in turn, pointed Bendis out to Marvel’s president, Bill Jemas, when they were looking for someone to write Ultimate Spiderman. Bendis’ work was so strong that he was tapped to spearhead a number of big projects, including Civil War II, debuting this year.

Brian Michael Bendis will be signing at the Austin store on June 10th from 6 until 8 PM. Come join us!