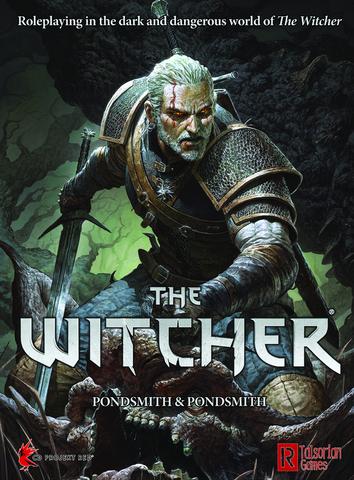 The Witcher Comes to Your Kitchen Table

The Witcher has been an incredibly popular series of novels, a genre-dominating computer RPG trilogy, and will soon be TV show.  It’s also a table-top RPG by R. Talsorian Games, the company that brought you the Cyberpunk RPGs and Castle Falkenstien.

Everything you need to play is in a single book, including the bestiary and a sample adventure.  There’s also over 30 pages of details on the world, its geography, and religions.  The game takes place between the second and third computer games (and there are four pages on the variable timelines created by player choices in the computer games).  Fans of the world will want this book just for its details on the setting.

Beyond the setting material, The Witcher is a traditional RPG where each player will create a character to be their alter ego in the world, and the game will be run by a Game Master.  The rules fall on the crunchier end of things, noticeably more crunchy than 5th edition D&D, possibly slightly crunchier than Pathfinder, but not as crunchy as Shadowrun’s current incarnation.

Characters can be any of four races: humans, elves, dwarves, and witchers (people removed from their families at birth to undergo intense training and physical mutation to turn them into monster-slaying, curse-lifting weapons).  There are also nine professions: Bard, Craftsman, Criminal, Doctor, Mage, Man-at-arms, Merchant, Priest, and Witcher.  The game gives you a wide variety in class choice, meaning that players will want to confer with the GM as to what sort of game they’ll be playing.  A combat-heavy campaign will warrant Witchers, Mages, and Men-at-arms, while a more intrigue-based game might be more fun with Bards, Criminals, Doctors, and Merchants.

Your character’s background details will be fleshed out with a lifepath, which can either be picked at each stage or rolled randomly.  For instance, the character I just rolled is from Cidaris in the Northern Kingdoms.  Their family has a deep, dark secret that if discovered would ruin them all completely.  Their father was fatally cursed in some way.  The character’s family was part of a band of performers (earning my character a bonus instrument and Friend).  The character’s most influential friend was a merchant who taught them how to be shrewd and clever (and adds a coin they earned to their starting gear).  The character has eight surviving siblings (All of whom will have their own relationship with the PC, ranging from wanting them dead to being extremely possessive of them).  After that, you roll on the Life Events table once per full decade the character has been alive.  Events could be fortune or misfortune (such as being hunted by the law or addicted to a substance), starting the game with a close ally or determined enemy, or some romantic tragedy like a kidnapped or cursed love.  You can even use random tables to choose your characters clothing, hair style, sartorial affectations (like an eye patch or furs), values, and attitudes towards other people.  The life path you roll or pick can give your character all sorts of bonus gear, relationships, or even penalties to your stats.

Your character’s abilities are rounded out by skills.  Some are general, and others are professional.  Each profession has a three-branched tree of skills your character can explore as they level up.

Finally, you’ll either roll or assign your stats by point-buy.  There are nine stats that include: Intelligence, Reflex, Dexterity, Body, Empathy, Craft, Will, and Luck.  There are also seven derived skills that govern things like how fast you can run, how far you can leap, and how resistant you are to being stunned, among others.

Combat is brutal in multiple ways.  Getting hit, or blocking or parrying a blow that would otherwise hit, degrades your gear.  Weapons and armor can be battered into uselessness. If an attacker rolls a successful hit on you, you get to decide how you want to deal with it, whether that’s attempting to dodge the attack, parry it, block it, or even just take the hit.  When you attack, you get to decide if you’re going for multiple strikes or a big, powerful one.  Hit location matters as well, with head shots being extremely dangerous and strikes to a limb being less severe.  There’s a fumble table for the different actions you might take in combat and an absolutely brutal critical wounds table that includes things like disfiguring scars, broken bones, concussions, ruptured spleens and sucking chest wounds.  And healing (without magic) takes days; there’s no nap-away-the-pain happening in the world of The Witcher!

Luckily, there’s all sorts of gear, from sword oils to armor enhancements to clotting powder to numbing herbs, to help you stay alive.  A detailed crafting system is included in the game, allowing your character to improve their gear, repair it, or even build things from scratch.  You’ll be harvesting resources from the wilderness and the bodies of slain monsters to complete your formulae and crafting diagrams, as well as learning new diagrams and formulae to add to your bag of tricks.

The GM section includes a lot of useful advice for running the game, covering topics ranging from plot armor to romance to blue booking between sessions.  There’s advice for getting the feel of the computer games and novels, how to design encounters and run combats, and dealing with missing players, as well as more Witcher-specific advice like designing curses.

If you’re looking for a more earthy RPG not afraid to get down-and-dirty with its combat system, want a game with more mechanical heft to its character options, or you’re a fan of the computer games and novels, you’ll want to add The Witcher to your collection.  Nobody in your group is going to mistake this game for D&D or Pathfinder, and fans of low-magic fantasy will find a lot to appreciate in The Witcher RPG.  Ask the RPG experts at your local Dragon’s Lair Comics and Fantasy® about The Witcher today.