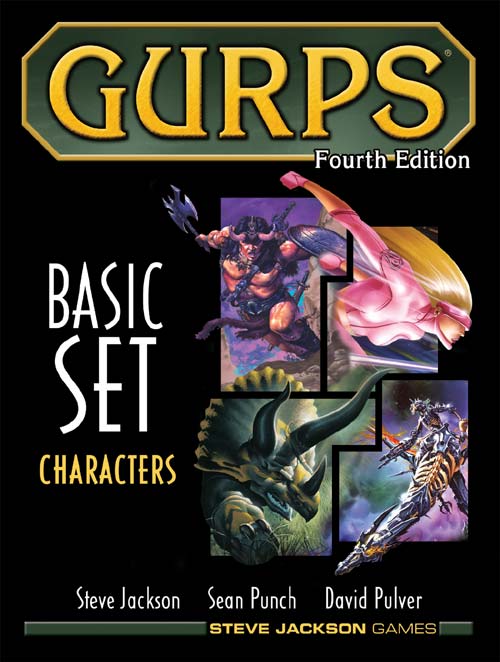 There’s a GURPS For That GURPS (standing for Generic Universal RolePlaying System) is the grandfather of all universal RPGs. The game has a storied history, launching the careers of famous writers like Robin Laws and S. John Ross, and it was the sourcebook GURPS Cyberpunk that inspired the infamous Secret Service raid on the Steve Jackson Games offices in 1990.

Like Fate and Savage Worlds, GURPS seeks to be an RPG for all settings but, unlike the newer games, does this by giving you far more than you need and asking you to set aside what you don’t need. You don’t play ALL TEH GURPS, not if you want to hold on to your sanity (or have a coherent game). There are rules that are specifically designed to create a superhero style of play, other rules exist to foster a comedic anime feel, and others fit best with gritty, real-world mercenaries and secret agents.

GURPS characters are typically built around four attributes: Strength, Dexterity, Intelligence, and Health. Each is assigned a number (GURPS characters are typically point-built), with 10 being the human average and 15 being Olympic-level abilities. Instead of using a single die with a flat probability curve, GURPS uses 3d6 roll-under for its core mechanic. Roll equal or less than the appropriate stat (plus modifiers, most especially based on the difficulty of the task and any skills the character might possess) and you succeed.

This gives you a very predictable mechanic; the bell-curve of 3d6 gives you a nice, broad hump at 10 to 11 where rolls will tend to congregate. This avoids the very swingy results of Savage Worlds’ exploding dice and D&D’s single d20. It also puts a strong emphasis on character builds, and GURPS has a very flexible system for building characters.

In addition to the four attributes, there’s a monster list of skills, covering everything from flint knapping to interstellar navigation. This is one of those areas where you really need to pick-and-choose what makes sense for your game. A campaign based on dueling martial arts schools or John Woo bullet-ballet movies might use the full range of attack and defense skills, plus new ones created just for this game. Meanwhile, a game about the crew of a starship tramp-trader might want to just use the bare-bones, most streamlined version of the combat rules so the players can focus on skills in haggling, appraisal, and forensic accounting. For this reason, it’s often best to think about GURPS as an RPG construction kit rather than a game in and of itself. If you’re a fan of really detailed rules, treating character creation like a game in its own right, browsing through giant lists of skills and character traits, or games like Pathfinder but want to branch out into other genres, you should absolutely give GURPS a look. Even if you prefer simpler games, you might still want to consider GURPS a look, and not only because the game can be pared down to a simpler core. What really sets GURPS apart from other games are the numerous source books. These cover a wide range of topics, from ancient technology to the extrapolated almost-magic tech of the future, from monsters like dragons and vampires to aliens, and genres ranging from space opera to horror to dimension-hopping to four-color super heroes to classic dungeon-delving fantasy. Even if you don’t run GURPS, the sourcebooks can be a valuable source of information, organization, and inspiration for the game you do want to run.

No matter what sort of RPG you’ve been itching to try out, GURPS can either do it or help you do it better with the game of your choice. Ask the RPG experts at your local Dragon’s Lair Comics & Fantasy® what GURPS can do for you.