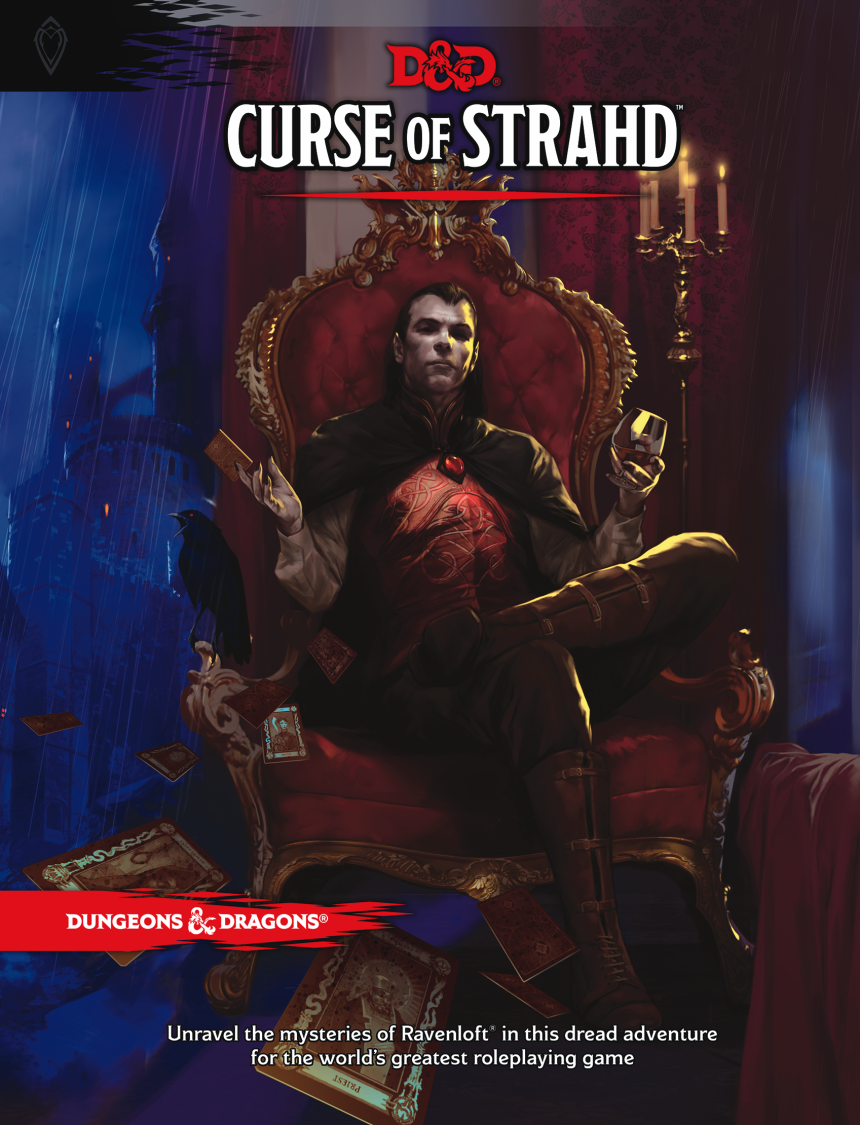 Just when you thought the official D&D adventures were well and truly stuck in Faerûn, WotC invites you to return to lovely, scenic Barovia. Explore a land of quaint villages (besieged by packs of wolves), enchanting forests (full of dark shadows hiding foul monsters), and mysterious fortune-tellers (who probably have an agenda they don’t want you to know about, but a gang of adventurers is just what they need to finalize their schemes), all nestled pleasantly beneath the fairytale spires of Castle Ravenloft.

Yep, that Castle Ravenloft, home to the vampire Strahd von Zarovich. Strahd and Ravenloft are the creations of Laura and Tracy Hickman. This creative couple had a different vision of what D&D adventures could be. Before they got involved, most published adventures were fairly spare in terms of story and background. The assumption was, at the time, that DMs would be dropping these adventures into home-brew campaign settings and already rolling plots created at the table. The famous Keep on the Borderlands adventure even went so far as not assuming the PCs would fight the evil cult and not the good-guy keep itself.

The Hickman’s however loved crafting background and story for their adventures, and they pulled out all the stops with Ravenloft. The adventure included a number of neat innovations for the time that really sold the story and made it central to the adventure experience. Among these was a fortune-telling mechanic. Drawing cards while the PCs consulted with a fortune-teller would decide the location of key components of the adventure (such as Strahd’s diary and various weapons capable of destroying him) and even Strahd’s plans for the PCs.

Ravenloft was a big success when finally published after five years of Halloween-night playtesting. The Hickman’s would later invoke many of Ravenloft’s successful elements in crafting the Dragonlance adventures, the first “adventure path” as we understand them today.

Since then, Ravenloft and Strahd became recurring elements in D&D games. During the ‘90s, when goth was the new black and Vampire: the Masquerade was wildly popular, the idea of a fog-enshrouded land that wanderers could enter but not escape was expanded into an entire demiplane of Dread. This lingers in 5th edition as the Shadowfell, and it’s a safe bet that the new version of this adventure will take place there.

Laura and Tracy Hickman were advisors in creating this new adventure, Curse of Strahd. Like all the big, hardback adventures published by WotC since the release of 5e, Curse of Strahd promises to take PCs from lowly 1st-level neophytes up through 10th level. Assuming, of course, they survive. In addition to the adventure from WotC, Gale Force Nine is producing a 54-card Tarokka Deck to be used with the adventure, once again randomizing certain elements of the adventure and allowing multiple play-throughs to each be a unique experience. Curse of Strahd should be available on March 4th.