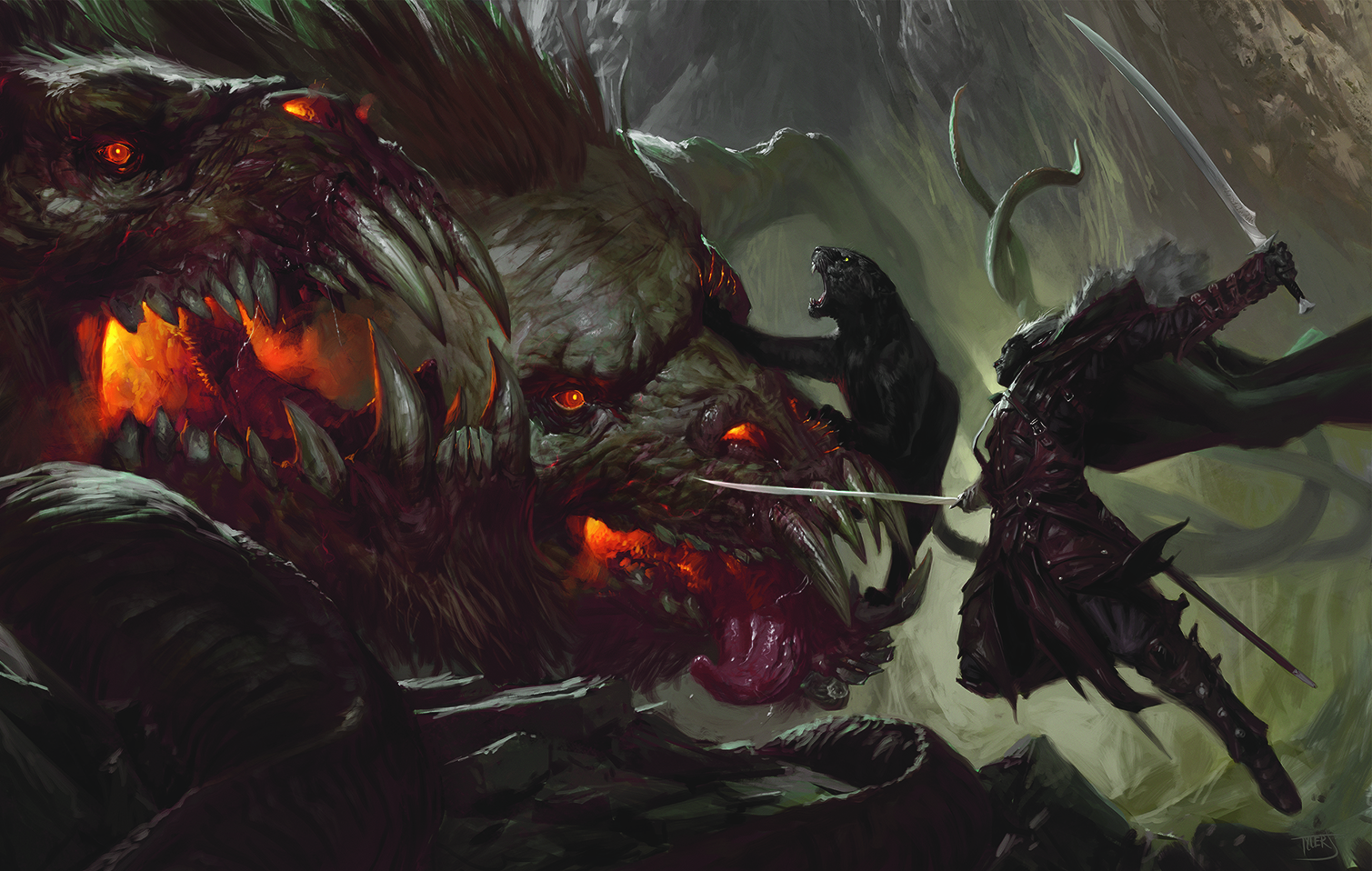 Walking in a WotC Wonderland If you could buy stock in mythologies, Alice in Wonderland, like Cthulhu, would be evergreen. While Cthulhu remains the bacon of RPGs, improving just about everything it’s added to, Alice appears to be the new hotness. Even WotC and Green Ronin are not immune to her appeal. Speaking of the new “Rage of Demons” storyline for D&D, Chris Perkins says, “My inspirations for RAGE OF DEMONS were Lewis Carroll’s Wonderland stories and EXILE, by R.A. Salvatore.”

The tent-pole product for “Rage of Demons” is the Out of the Abyss adventure path for 5e D&D. As we’ve seen with the previous adventure releases from WotC for 5e, Out of the Abyss is a hardcover collection of adventures that promises to take characters from 1st to 15th level. Unlike previous outings, this one has a much more sandbox feel to it. The setting is the Underdark, that massive subterranean realm home to drow, illithids, derro, and kuo-toa as well as orcs, goblins, and other monsters better known to surface dwellers.

All Hell has broken loose in the Underdark, and I mean that almost literally. No fewer than eight lords of the Abyss, the most powerful demons, have been unleashed on the Underdark. Some, like Demogorgon, stomp about like angry kaiju, leveling cities and leaving destruction in their wake. Others, like Juiblex, have more subtle plots in mind. All are competing against one another to take best advantage of this opportunity to further their plots upon the mortal world. This time out, WotC has teamed up with Green Ronin, of Blue Rose and the Dragon Age table-top RPG fame. As you’d expect from a team-up of this sort, the book is lovely, full of top-quality art. Play begins with the PCs captured in the Underdark and needing to escape. This leads to a hex-crawl through the underground realms of derro and drow before the PCs learn the true dangers the demon lords pose to not just the Underdark, but the whole world.

While in the past madness was largely the domain of the slaadi or “Outsiders,” WotC is fully embracing the notion that demons are both terribly unnatural beings as well as avatars of Chaos. A madness mechanic has been added to the rules, and each demon lord is now associated with a certain sort of insanity. Effects range from the berserk madness of bestial Baphomet, to the mind-controlling spores of Zuggtmoy that infect flesh as well as psyche. Exposure to the demons, their minions, as well as the marks of their passage, can all increase the madness of PCs, leading to irrational, and possibly even dangerous, behavior on the parts of the heroes.

Out of the Abyss is, of course, only part of the “Rage of Demons” event. As always, WotC is coordinating both digital and analog entertainment for the event, and the whole thing is being bookended by novels from Salvatore, Erin Evans and Troy Denning. Out of the
Abyss is available now, as are related opportunities to play D&D, at a Dragon’s Lair near you.