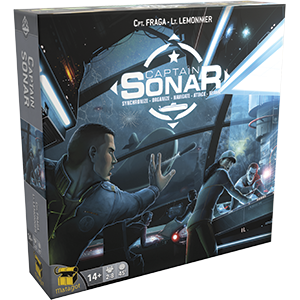 You Sank My Submarine!

If you enjoyed playing the old Battleship game but long for a more complex and team-oriented experience, Captain Sonar, from Matagot, is the game you never knew you were waiting for. It came out in 2016 but was getting a lot of play at GenCon this year, and it’s pretty easy to see why.

Players split up into two teams. Each team is the crew of a submarine hunting the other team’s sub. The goal is to destroy the other sub by doing four points of damage to it. Everyone on your team (up to four players) has a job. The Captain calls out directions and marks on their map with dry-erase markers the route they take. Each movement causes the Engineer to mark off systems on a chart that are disabled until a section or a path of systems has been filled in. (Filling in a path allows you to reactivate all the systems; filling in a section also allows you to reactivate all the systems but deals a point of damage to your sub.) The First Officer, meanwhile, is using each movement to charge up systems so they can be deployed to either help find the enemy sub or launch attacks at it. And the Radio Operator is listening to the other team’s captain and using a transparent cover to try to figure out where the enemy sub is. This all happens in real time, so play is frantic and frenetic. To keep things fresh, there are five maps you can play with, all dotted with islands that restrict movement. More advanced maps also come with missions you can perform or unique complications to add yet more layers of complexity on top.

If that all seems too complex, there’s a turn-based version of the game with simpler maps and where each captain takes turns issuing orders and everything moves at a more sedate pace. This is really helpful if you’re learning the game, or if you’re playing with four or fewer players and everybody is trying to do multiple jobs at once.

Captain Sonar takes about an hour to play. You can play it with as few as just two players, but it really sings if you’ve got four on each team. If your board-game night needs more team games like Codewords, talk to the pros at Dragon’s Lair Comics & Fantasy® about adding Captain Sonar to your library.