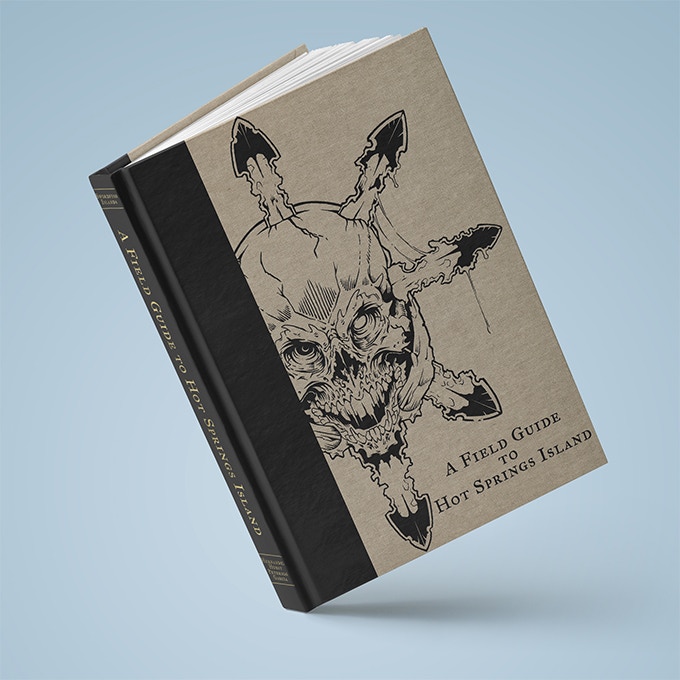 Your Own Private Hot Springs Island Hot Springs Island is an unusual system-agnostic hex-crawl adventure location for fantasy RPGs. That’s quite mouthful, but what does it mean? It means it’s a geographical area that combines overland travel (displayed as a hex map) with discreate “dungeon” locations. The PCs will travel across the hexes, exploring the island, finding the dungeons and getting up to hijinks.

The island itself isn’t terribly large, but it’s incredibly dense. There’s a lot going on, with four different competing factions, plus the conflicts between six different types of elementals AND the messes left across the island by two different ancient races that once ruled there. The whole thing is set up to be a powder keg, a careful equilibrium your players will blow sky-high with their actions.

Like Scenic Dunnsmouth, this is as much a tool-kit as it is an adventure. You’ll use nested tables to procedurally generate encounters, conflicts, and situations across the island for the PCs to dig into. The PCs can visit the same area multiple times and find new things with each visit. Since the random tables involve bell-curves, they’ll quickly learn what to expect while still encountering the occasional unusual exceptions.

The DM’s guide, called The Dark of Hot Springs Island is jammed with neat locations, information about the factions and their relationships with each other, a table describing the different monster parts the PCs can sell to the different factions, and 300 unique treasures, many of which are magical and unusual. For instance, one of the treasures you can find is the severed hand of a pick-pocket, attached to a leather leash and animated. Treat it well, and you might be able to teach it to do useful tricks. Otherwise, it’s going to randomly steal stuff if you don’t keep it well secured. Everything is organized for easy use at the table. DMs will easily find the stuff they need when the players encounter it, allowing the players to set their own pace and goals. If you ever thought about running a sandbox campaign but felt too intimidated by all the possibilities, The Dark of Hot Springs Island is a great way to test the waters.

What you won’t find are any stats. That’s what’s meant by “system agnostic.” Luckily, most of the creatures are fairly standard fantasy critters: dire boars, nereids, ogres, lizardfolk, and the like, making it easy to plug in the stats from your game of choice. However, that does mean either dropping those stats in the margins of the book or having the monster book open at the same time.

The player’s book is called A Fieldguide to Hot Springs Island and it’s an in-game artifact your PCs can find and consult during their adventures. It includes an incomplete map of the island, notes on the various fauna and flora (many of which can be put to unusual uses, including being weaponized) and some basic information on the factions of the island. There’s also marginalia describing some of the inaccuracies in the book. Or are the notes in error? The only way to know for sure is to go see for yourself!

A Fieldguide to Hot Springs Island and The Dark of Hotsprings Island are both beautiful, well-made books you’ll enjoy having at the table while you game. Both have black-and-white interiors and are exceptionally well organized, making them a joy to reference during play. Begin your adventures on Hot Springs Island at Dragon’s Lair Comics and Fantasy® today.