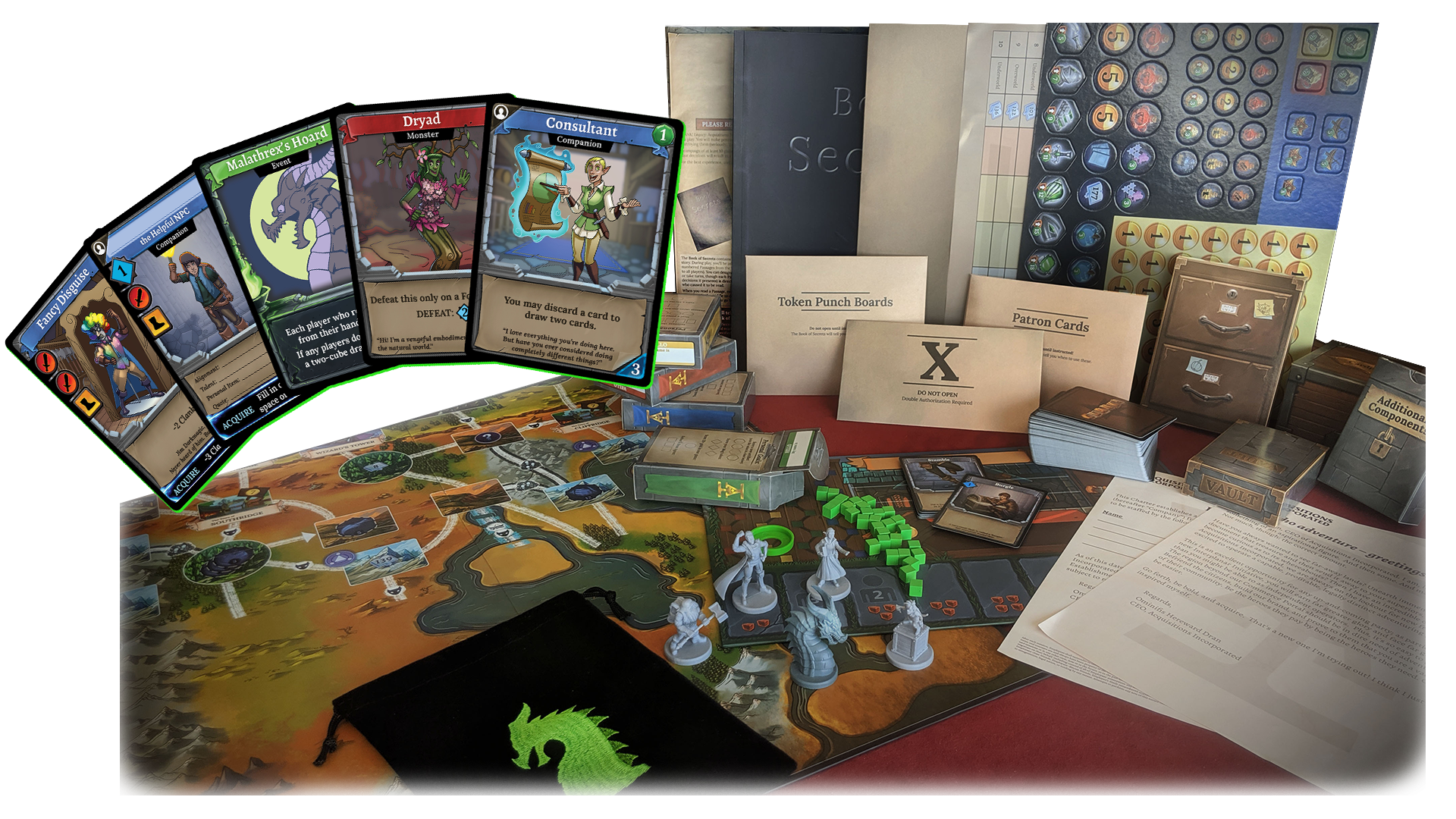 The Acquisition Incorporated D&D book wasn’t the only AInc product we got to see at GenCon.  Your roving reporter got to talk to the folks from Direwolf Digital and Renegade Game Studios about their upcoming Clank! Legacy: Acquisitions Incorporated.

Yep, you read that right; this is Legacy version of Clank!  For those of you unsure what we mean by “legacy game,” these are board games that change as you play them.  As you play the game, you modify components, sometimes by adding new parts to the game, sometimes by editing rules or cards by putting stickers on them, sometimes by actually tearing-up components and throwing them away!  The result is a game that’s constantly changing as you play it, reacting to what you do.  The moves you make become meaningful as the consequences echo through a full campaign of playthroughs.  This makes every campaign in a legacy game unique to your group.

First, Clank! Legacy: Acquisitions Incorporated is Clank! as you already know it, but expanded out into a campaign of ten or more games.  The board is double-sided, with an overworld map and an underworld map.  You’ll be playing a new office of the Acquisitions Inc. franchise.  And you’ll be competing against Dran Enterprises.

But that’s not the only source of story in this game.  The boards also include numbered Waypoints that will have you reading from the Book of Secrets.  Each entry has an opening and a conclusion that shape your story, based on the choices you make.  These choices are often represented by stickers that might go on the game board, on cards, or even other stickers.

In fact, this game takes full advantage of the Legacy format.  Unlike other Legacy games where you might make choices between sessions, or at the start of a session, Acquisitions Inc. Clank! has Legacy content popping up constantly while you are playing the game.  One example shown to us was a witch’s potion card.  Exactly what the potion does depends on what ingredients you’re able to gather for the witch’s brew.  The resulting card is added to the deck, now a new component in your game.

The end result is your own, unique version of the game, with cards and a board transformed by the choices you made.  And, unlike other Legacy games which are meant to only be played once, you can can play Clank! Legacy: Acquisitions Incorporated multiple times.  Which his good because this is not a game to be rushed through.  The constantly shifting components and rules can be almost overwhelming at times, even as the unfolding story urges you to push faster through the campaign.  But there’s a lot of Legacy meat they’ve added to the bones of raw Clank! and you’ll want to take your time to savor this feast.

Clank! Legacy: Acquisitions Incorporated is for two-to-four players.  Individual games last between 60 and 90 minutes, and a full campaign typically runs 10 games.  If you’re a fan of Clank! you’ll want to give this added Legacy twist a try, especially if you’re an old hand at Clank! now.  If you’re a fan of Legacy games, you’ll absolutely want to check out Clank! Legacy: Acquisitions Incorporated to see just how far the genre can be pushed in terms of dynamism and storytelling.  If you love games that make you choose between individual competition and community goals, games that slowly tell stories, and games that react to your choices and actions, you absolutely want to talk to the good folks at your local Dragon’s Lair Comics and Fantasy® today about pre-ordering this game.