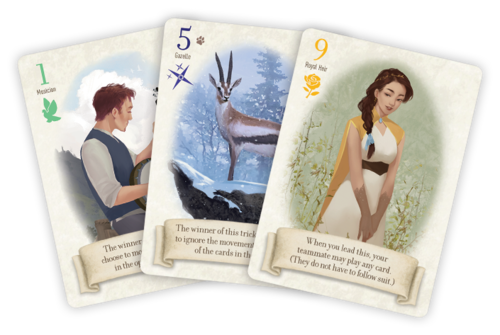 Almost exactly a year ago, this space told you about a new two-player game from Renegade Game Studios called The Fox in the Forest, a new trick-taking card game designed specifically to take full advantage of its one-on-one format.  Renegade is back this year with a cooperative version called Fox in the Forest: Duet.

Like its predecessor, Fox in the Forest: Duet employs some clever mechanics to maximize the fun.  Central to these is an s-shaped track lined with red gemstone counters.  If you win the trick, you move your counter on the track towards you.  The number of spaces you move is based on the number of paw-prints found on both cards played.  If the space you land on has a gemstone counter beside it, you claim one.  But if you pass beyond the end of the track, you actually lose a space on that track by placing a Forest token on it, making the track shorter on that end and making it far more likely you’ll run off the end again.  Place too many of these Forest tokens and you lose the game.  You’ll play through three rounds, each round requiring you to gather more gemstones than the previous one.  Gather up all the gemstones and you and your partner win.

Like the previous game, some cards have special abilities, allowing you to move your token in different ways across the board, for instance.  The game has the same fairy-tale feel with its beautiful art, choices of suit types, and themes presented in the special cards.

I’m thrilled to see this game.  In spite of some huge leaps forward, there’s still a lot of room for new ideas and games that take full advantage of cooperative mechanics.  If you’ve never tried a cooperative game before, or there’s a someone special in your life who doesn’t like playing competitive games against you, talk to the good folks at your local Dragon’s Lair Comics and Fantasy® about Fox in the Forest: Duet today.