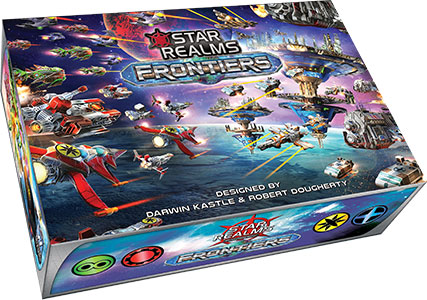 Collectible card games like Magic: the Gathering can be a lot of fun but they do require a certain level of commitment in terms of collecting cards and building decks.  If you want to a taste of that deck-building, combo-crafting goodness you can enjoy casually with friends who are not into the whole collectible aspect, there’s a number of deck-building games to choose from.

The big difference between a collectible card game and a deck-building game is where the cards come from.  In a collectible card game, you’re traditionally expected to purchase your own cards and build decks that are unique to you, decks that you will play in multiple games.  (However, there are formats that shake those expectations up.)  In a deck-building game, all the cards that are going to be used in play are in the box, you’ll use those cards to build a new deck every time you play, and actually building the deck happens at game time.  It’s a bit like a sealed tournament in a collectable card game except you already know what cards are going to involved in the game.

The granddaddy of the deck-building genre is probably Rio Grande Games’ Dominion.  It set the basic pattern of play.  There’s generally a “market” of cards anyone can purchase from.  You’ll use some of the cards in your hand to purchase cards from the market.  Other cards will allow you to break or shift the rules during your turn.  At the end of your turn, the cards you played go into your discard pile and you’ll refresh your hand from your draw deck.  When your draw deck is empty, you’ll shuffle your discard pile and it becomes your new draw deck.  The goal is to build a deck that allows you to acquire more point-scoring cards than your opponents.  You’ll have to balance focusing on cards that allow you to buy other cards (very powerful early on), cards that allow you to bend the rules (key to acquiring the higher-value point-scoring cards), and the point-scoring cards (mostly useless during the game, but necessary for victory).  The best strategies frequently revolve around synergies between cards that look very much like an engine-building game.  Once your deck is complete, it should unleash a chain of events that propels you towards victory.  However, the more cards you have in your deck, the less likely you are to pull any particular one, and you could end up with a hand of mismatched cards at a pivotal moment.