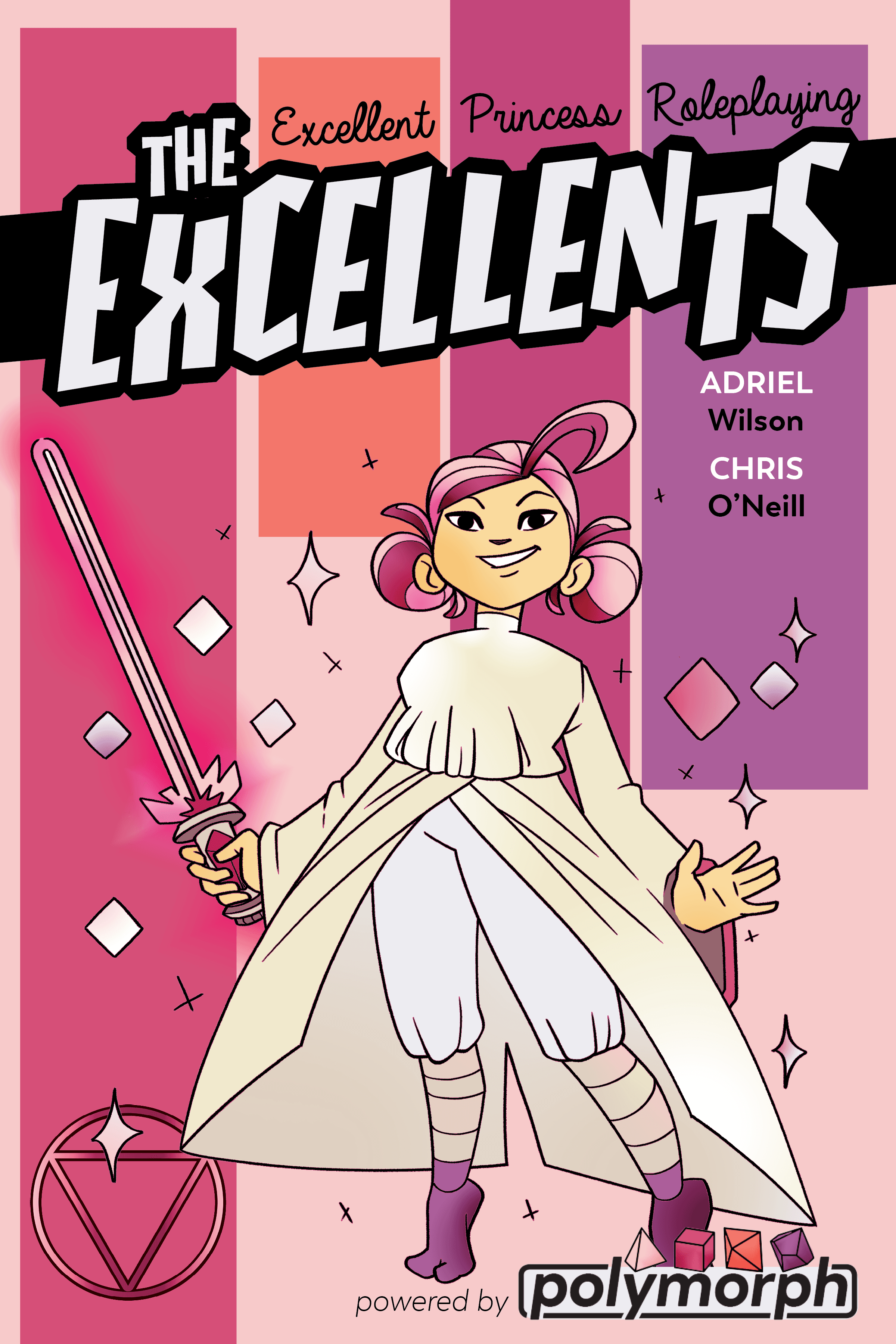 Grab Your Beast Friend and Prepare to Princess

The Excellents is a nice and simple RPG about playing magical princesses defending a mystical realm in a cartoon series like She-ra and the Princesses of Power or Steven Universe.  With Crown, Sword, animal companion, and the occasional musical number, your princesses (who are of course in a band, because magical cartoon princesses) will explore the strange world they live in and challenge the threats to it.

The Excellents, written by Adriel Wilson and Chris O’Neill and published by 9th Level games, is a sweet little RPG with a clever dice mechanic they call the Polymorph System.  It’s less about logistics and slaying things like D&D, and much more about using the dice to inspire an epic tale you and your friends share in the creation of.  This creativity starts with character creation.  Rather than reach for a handful of dice, you start creating a princess by deciding what your princess is a princess of.  This is the thing your character was “way, way into” before they were transported to Awesome World where they became the princess of that thing.  Examples include the Laser Princess of Science Fiction Movies, the Library Book Princess whose realm is Local Libraries and the Dewey Decimal System, and the Hair Metal Princess of “everything Grunge, Speedy, and Wild.”

The next thing you need to figure out is your princess’ crown, which should fit into the theme of their realm.  For instance, the Laser Princess’ crown is of shining metal studded with rubies that shoot lasers (naturally) while the Heavy Machinery Princess might have a hardhat studded with industrial diamonds.

Princesses also wield swords, and, as you’d expect, these swords also reflect their theme.  Laser Princess has “the coolest green laser sword, that’s super good at cutting through bureaucracy and getting things done,” while Heavy Machinery Princess might wield a giant wrench.

Princess’ round out their ensemble with shoes (which give bonuses to certain rolls, with eight common choices listed), a library book, and a beast friend (who might actually be a robot or a plant or whatever sounds cool, but of course you’ll want yours to be a dragon, we’re sure).  You also pick your princess’ Heart.  Her Heart is a single word that embodies “the drive that helps you help others.  Heart is how you look at the world, and how the world looks to you.”  There’s a d100 list if you’re stuck for ideas that includes “adorable,” “intuitive,” “leader,” “sleepy,” and “weird.”  Give your princess a name, pick their pronouns, and maybe make a sketch of them and their beast friend, and you’re almost done.

The last choice is your princess’ role.  Role answers the question, how do you save the day?  It dictates which die you roll in your adventures (and you’ll only ever roll that die.)  There are four roles: the magical one (d4), the brainy one (d6), the charming one (d8), and the tough one (d10).

If you roll the highest number on your die and “are performing an action that aligns with your crown,” you succeed.  Maybe this is because what you’re doing furthers your princess realm, or maybe you just bash the thing with your heavy crown until it’s the right shape.

Where in most games rolling a 1 would be an automatic fail, in The Excellents it means your Beast Friend jumps in to help you.  If you’re attempting to do a thing your Beast Friend could do, they do it for you and you succeed.  And if the thing you’re trying to do invokes your Heart, or your sword has a feature that deals with it, or your library book is about this very topic, then you get Advantage on your roll, which works almost like it does in D&D; you roll two dice, and you succeed if either die comes up the right number.

It’s an incredibly clever, rules-lite system with just about everything you need to know on your character sheet.  You only ever roll the one die that corresponds to your princess’ role, and what numbers you need to succeed are on your character sheet (aka your Princess Diary).  You can pick one player to be a GM, but the game is also designed to run without one, with everyone deciding together what challenges they’ll face.  The game includes a general template for adventures (called Scripts) as well as two examples.

If you’re looking for something new, but don’t feel you have the time to tackle another big huge coffee-table RPG book, you might want to check out The Excellents.  It’s only 76 pages long and small enough to fit in the back pocket of your jeans.  Tina Bongorno provides the adorable art.  The Excellents would make a great first game for kids interested in RPGs, but it’s also an excellent game to travel with, or as a quick-and-dirty beer-and-pretzels option for when too many players can’t make it but you still want to RP with the crew you have.  Ask the RPG Princesses and Beast Friends at your local Dragon’s Lair Comics and Fantasy® about adding The Excellents to your library today.