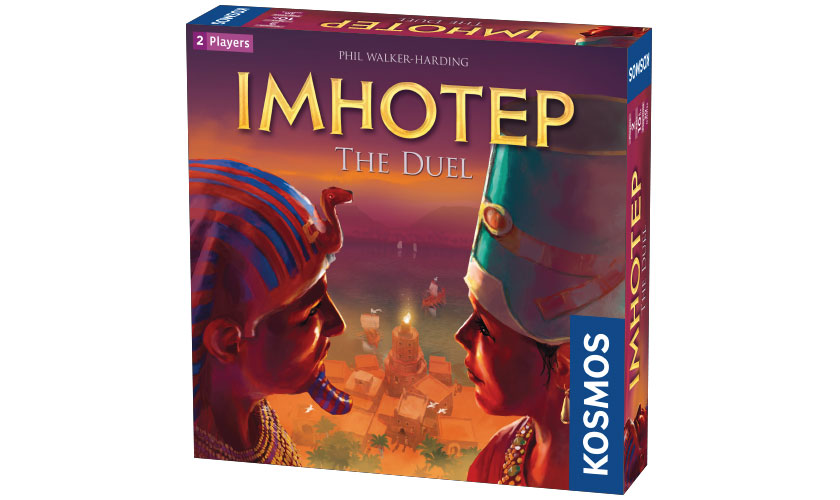 It’s a good time for two-player games.  We’ll soon be getting a cooperative version of Renegade Game Studio’s Fox in the Forest called Fox in the Forest: Duet.  At GenCon, the good folks at KOSMOS Games showed off Imhotep: the Duel, a two-player variant of the award-winning ancient-Egyptian-monument-building board game Imhotep.

In Imhotep: the Duel, you’re competing to build an obelisk, two pyramids, a temple, and a tomb.  Each of these is scored differently (and there are two different versions on each score board, an A and a B side).  For instance, on the A side, the Temple just gives you a single point for every circle on the tiles you claim, but the Obelisk gives you six bonus points if yours is taller than your opponent’s.  The tomb pieces are numbered, and you score more points depending on whether or not you have a run of consecutive numbers (on the A side, you get more points the longer the run, but on the B side, a run no matter how long only counts as a single unit for scoring, so what you really want to do is skip every other number).

You get the tile building pieces for your projects by unloading ships.  The centerpiece of the game is a board of nine spaces, arranged in a three-by-three grid.  Docked to adjacent sides of this grid are six boats (three to a side), each holding three resource tiles.  On your turn, you get to place a worker meeple on the grid.  If there are two or more meeples on a row or column, instead of placing a meeple, you can unload the boat on that same row or column, even if one or even all of those meeples belong to your opponent!  The meeple closest to the boat gets the tile furthest in the back of the boat, the next closest meeple claims the middle tile, and the furthest meeple claims the tile closest to the board.  After each player has claimed their tiles, the meeples used to unload the boat are removed from the board.

The resulting game can be pretty cut-throat, as you attempt to maximize your score while denying your opponent the tiles they need to maximize their final score.  In addition to the resource tiles, there are special tiles that allow you to place multiple meeples on your turn, or even place a meeple and unload a boat in the same turn.

This game benefits from being totally transparent; everyone can see what’s on the board and what their opponent is trying to do.  Since every project can be scoring on either the A or B side for each player, it’s easy to mix-and-match things, with one player scoring entirely on A and the other player scoring on A for the Obelist and Tomb, but on B for everything else, allowing you to exercise new strategies and goals for greater replayability.

Imhotep: the Duel takes about a half-hour to play, set-up is simple, and it doesn’t require a lot of table space.  In addition, since everything but the meeples is flat tiles, with nothing standing tall that can fall over, it’s a good option for travel in trains and cars.  If you’re looking for a competitive one-on-one game to play with a friend or significant other, ask the folks at your local Dragon’s Lair Comics and Fantasy® about adding Imhotep: the Duel to your collection today.