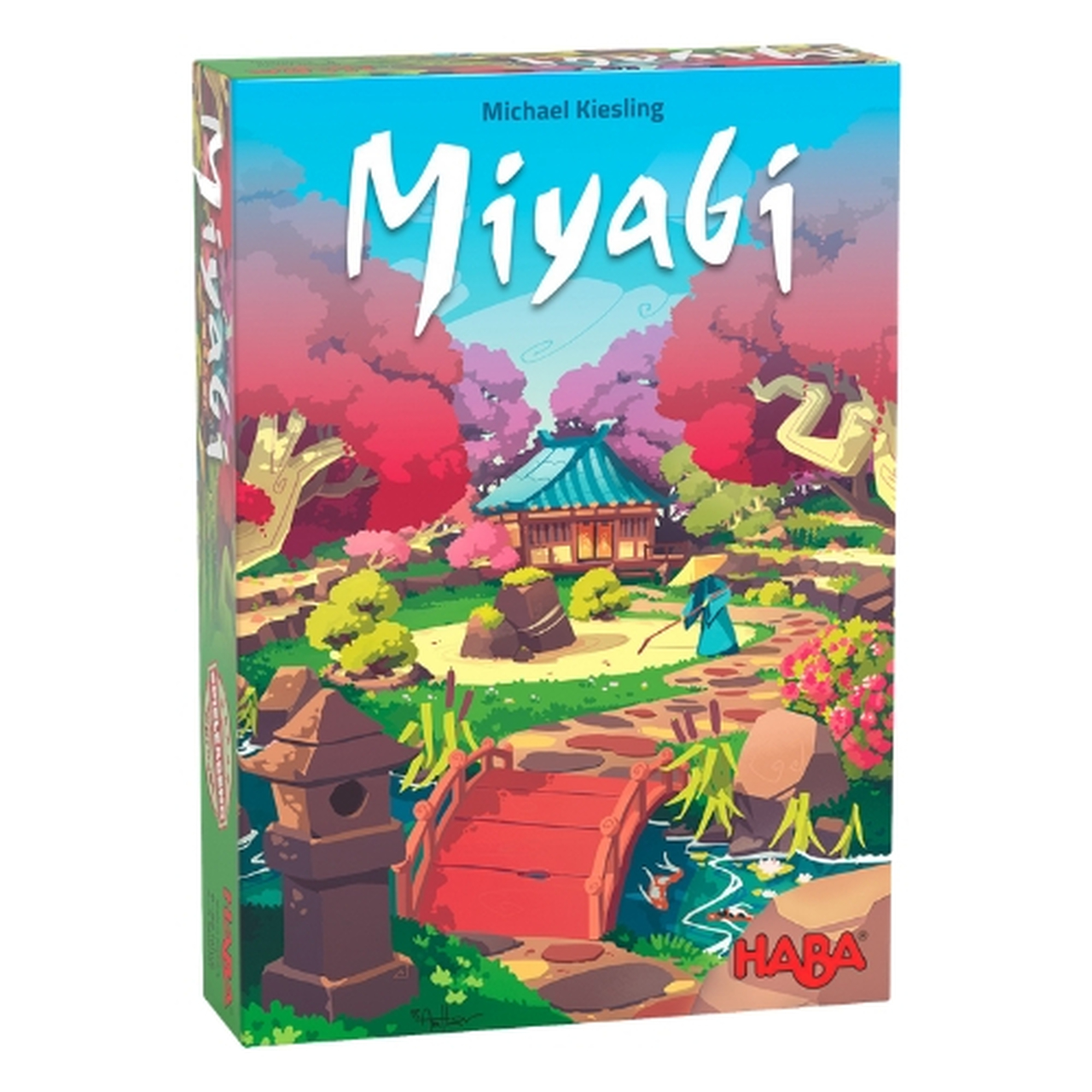 The biggest and best in European gaming can be found every year at the SPIEL convention in Essen, Germany.  This year, our friends at HABA are releasing three new games, including Cloaked Cats, which we got a sneak peek of at GenCon.  One of the other games being released is a Japanese garden building game, Miyabi.  Miyabi was designed by Michael Kiesling, the same guy who gave us last year’s Spiel des Jahres (Game of the Year) winner, Azul.  Like Azul, Miyabi combines a simple premise that creates interesting consequences for you and your opponents with every move.

You’re attempting to build the most beautiful Japanese garden in this game.  Every player begins with a six-by-six grid to build on.  Pieces are then turned face up.  How many of each depends on the number of players, but the playing pieces include 1×1, 2×1, 3×1, and L-shaped pieces.  Each piece will have one or more garden elements on it from one of six types, including stones, bushes, and ponds.  Each row on your board corresponds with a garden element; you’ll only score points if that element is placed on that row (though the parts of the piece that don’t include that element can impinge on other rows).  You’ll then get one point for every representation of the element on that piece, and the larger pieces tend to have more elements on them.

As you place pieces on the board, you’ll also multiply this score by how many levels up the piece is.  In order to fit, the piece must be flat; that is, you can’t have part of it a level or two higher than the rest.  So you’ll need to place things carefully in order to build up your board evenly to maximize your points.

In addition, whenever you place an element on your board, you’ll also place a lantern at the top of the column.  When you have a lantern on a column, you may not place any more elements in that column.  Since you must place every piece you pick, you might find yourself unable to move.  If that happens, you pass and you get skipped until all the pieces have been claimed.

Once all the pieces are claimed, you clear the lanterns (but not the placed tile pieces) from the board, draw new tile pieces, and the first-player token gets passed around so a new player goes first this round, and whoever went first in the previous round now goes last.

Once you’ve played through the pre-determined number of turns, each player counts the number of garden elements visible in each row of their board.  Elements that have been covered by later tile placement are not counted.  The players with the most and the second-most number of elements in a row get bonus points.  Once all points have been totaled up, the player with the most points wins.

Miyabi is the sort of game where every move you make is going to have an impact on what you can do later.  You can pick pieces from the pile in order to build out your garden or you can aim to prevent your opponents from claiming pieces they need to build up properly.  The result is an ever-shifting competitive puzzle.

Miyabi is a game for two to four players.  A full game takes about 45 minutes to play.  It also includes five alternative versions in the box to help you switch things up.  If you’re looking for the cutting-edge of what’s hot from Europe right now, talk to the board game experts at your Dragon’s Lair Comics and Fantasy® about adding Miyabi to your collection today.