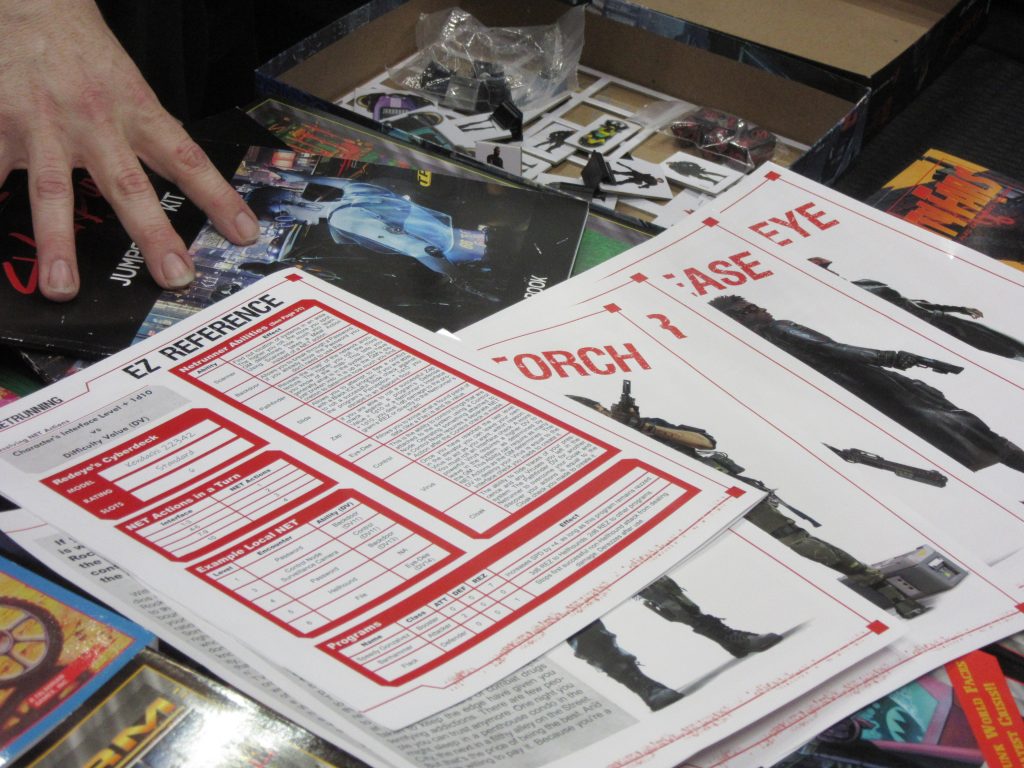 If you’re all about the analog games (board, card, pen-and-paper RPGs, and the like), you might not have heard about CD Projekt Red, a Polish computer game company most famous for taking The Witcher novels and turning them into one of the most popular computer RPGs of the last decade.  That popularity lead to US pen-and-paper RPG publisher R. Talsorian Games publishing a game based on The Witcher franchise.

Needless to say, there’s a lot of excitement surrounding the announcement of a new Cyberpunk RPG.  The first Cyberpunk came out in ’88 and was famously playtested by Walter Jon Williams, author of the cyberpunk novel Hardwired.  The fact that Cyberpunk Red is something of a prequel to CD Project Red’s first post-Witcher game has created a lot of buzz among computer gamers who might not normally pay much attention to pen-and-paper gaming.

While we don’t have an official release date for Cyberpunk Red, R. Talsorian gave us a very generous peek at GenCon with their Cyberpunk Red Jumpstart Kit.  As you can see from our pics, this box is stuffed and includes a lorebook that describes the state of the world and Night City after the Fourth Corporate War and a rulebook that gives us the basics of the game.  It’s enough to generate your own characters, modify the pre-gens that come with the game, and run full campaigns, though more is promised when the final core rulebook is eventually released.  We also get those pre-generated characters, each on their own front-and-back full-color page, a number of cardboard standees to represent the PCs, NPCs, and vehicles of the Cyberpunk world, and two full-color double-sided maps you can use to run combats in back alleys or corporate offices.  You’ll also get some red-on-black dice so you can get started playing right out of the box and some quick-reference sheets you can use to keep you on the right track.

If you’re a fan of the Cyberpunk games of yore, you’ll find that this is very much the game you remember, with its Rockers, Solos, Netrunners, Fixers and Nomads.  However, this is a truly new edition.  The Friday Night Firefight combat rules have been replaced with a sleeker (and possibly slightly less vicious) set of rules that will make combat a lot quicker.  Bigger changes, however, came for Netrunners.  No more will you be zipping your Netrunner up in a Kevlar sleeping bag and hiding them in a closet.  And no more will the rest of your gaming group go out for pizza while the netrunning characters hack into the security system of your target.  Now the hackers have to be with the gun-slingers, dodging bullets and microwaves while they open doors and deactivate security cameras.  The mini-game that used to be netrunning has been replaced with a far sleeker and quicker system that integrates much better with meat-space combat.

R. Talsorian completely sold out of Cyberpunk Red Jumpstart Kits at GenCon.  As I write this, they’re still furiously putting together fresh new boxes.  If you want yours, talk to the RPG experts at your local Dragon’s Lair Comics and Fantasy® about ordering one today.