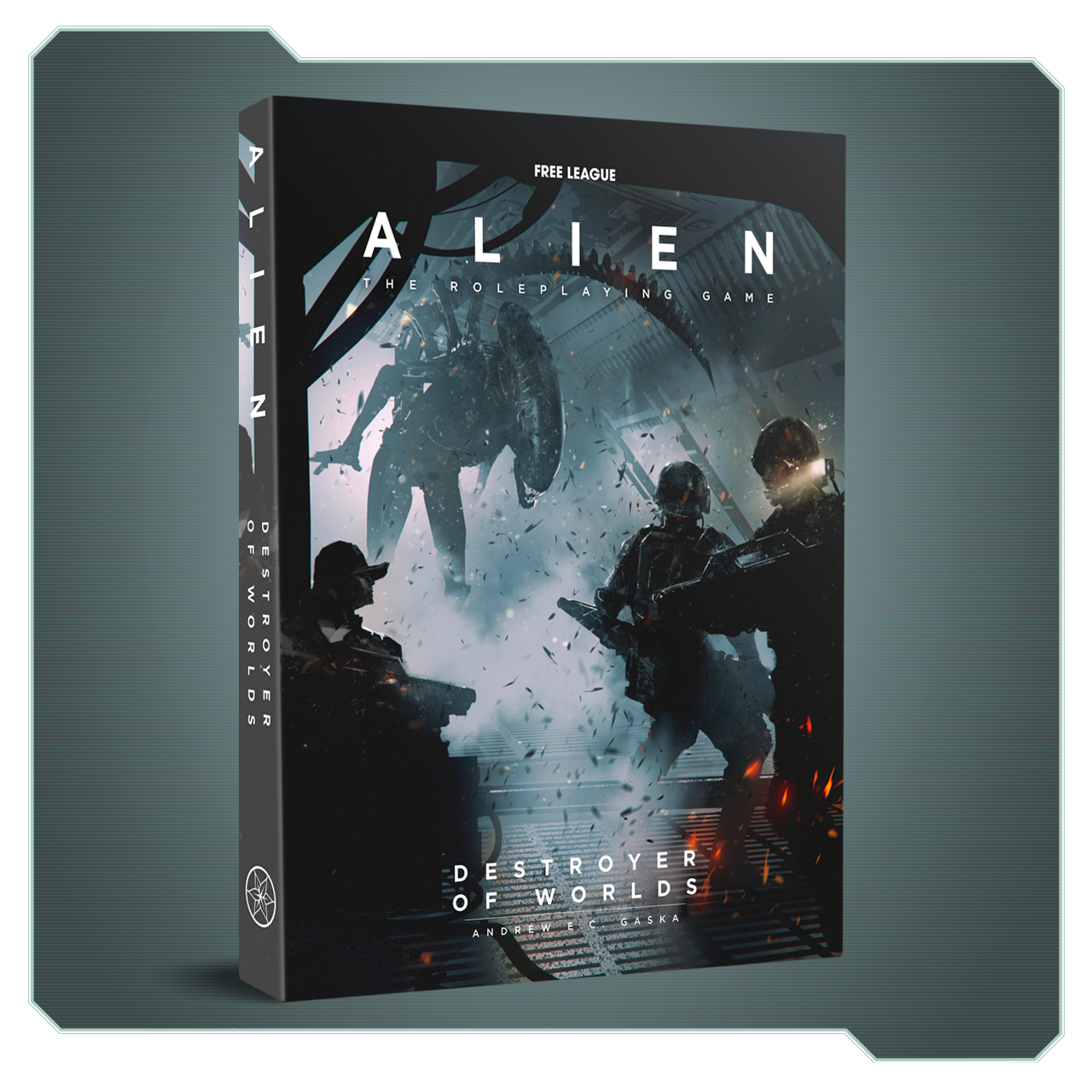 Just Another Glorious Day in the Corps!

Free League Publishing, having hit it out of the park with the ALIEN RPG, followed up with a pair of boxed sets.  In addition to a Starter Set they’ve also come out with a boxed adventure called Destroyer of Worlds.  Intended to be a Cinematic Scenario (meaning geared towards being played as a one-shot), Destroyer of Worlds focuses on a team of Colonial Marines, the grunts made famous in the ALIENS movie.  Does your team have what it takes to complete the mission and escape alive?

Honestly, probably not.  There are lots of opportunities for your characters to lose their minds, get in over their heads, and face mastication and worse from alien horrors.  As opposed to Campaign play, which is what you’re probably more used to from games like D&D, Cinematic Scenarios are all about recreating the feel (and the body count) of the movies.  Which means your character has a good chance of getting munched, blown up, melted by acid, or fragged by a xenomorph or one of their comrades before the evening is over.

The scenario is designed for three-to-five players and comes with five pre-generated characters in the box.  You’ll also get suggestions for how replacement PCs can be brought in when a character dies.  The box also includes a deck of Personal Agenda cards. Each player draws one, and it tells you what your character’s secret mission is.  As in the movies, just because someone is human doesn’t mean you can trust them.

This gives the scenario some replayability, which is increased by the addition of Story Cards.  The GM draws these at particular points in the adventure to mix things up, perhaps adding a new complication or utterly transforming the players’ group goal.  Combined, this gives you the chance to play this scenario multiple times while keeping it full of surprises.

In addition, Free League has taken advantage of the boxed format to include a lot of goodies for the game, including equipment and vehicle cards, NPC cards that have a headshot on one side and GM details on the other, and a wide array of great maps, including a double-sided poster map, for the players to use.  That’s right, when the players inevitably ask, “Hey, can the people sending us on this mission give us any technical details of the place?” the GM can respond with, “Why yes, they can,” and dump a whole mess of quality maps into the middle of the table.  These include a map of the entire colony as well as more specific locations like the medical center and the beanstalk/space elevator.

You will need to have the ALIEN RPG core book to play through this scenario, and you’ll want a lot of six-siders in at least two different colors.  If you’re looking for a great one-shot horror-themed adventure to turn into a new Halloween tradition, or something you can bring to conventions that people can play over and over again without feeling like the mysteries have been spoiled, talk to the totally-organic-and-not-in-any-way-android RPG exerts at your local Dragon’s Lair Comics and Fantasy® about getting this boxed set today.