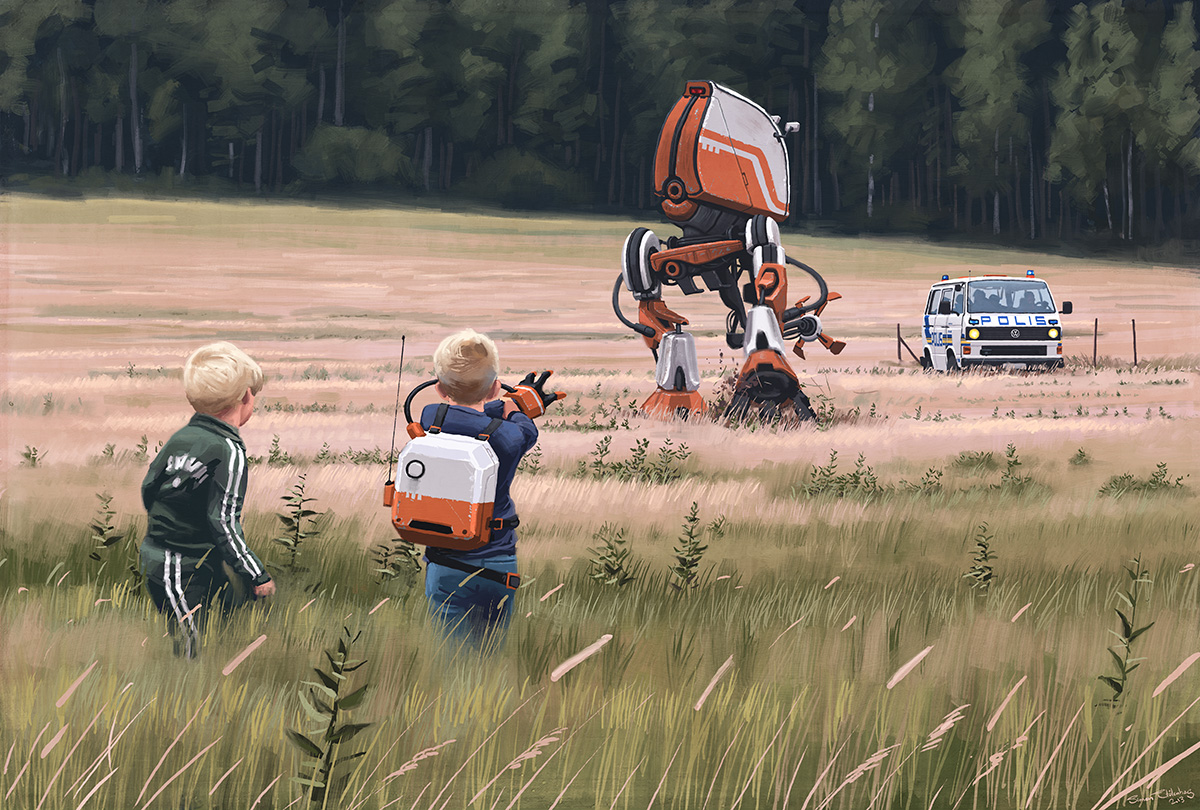 Mysteries in an ’80s That Never Was

“When fusion, particle accelerators and the magnetrine effect were discovered in the 1950s, it broke the boundaries between the possible and the impossible. Huge transport vessels fly, cyborgs and robots can think, scientists create time portals and objects that replace people’s identities.  Strange beasts roam the landscape, and humanity can contact people and creatures from other times and places.”

This is a game about playing the kids you see in Stålenhag’s art, whether they’re controlling giant robots, swimming in a lake with strange, damaged coils sticking up through the water, or walking home from school on a winter evening while magnetrine-lifted skyships fly across the sunset.  It’s a world where the adults are distant, distracted, or absent.  It’s also a world full of rogue government agencies, broken supertech, and malfunctioning AIs.  The kids will encounter these strange things, often from the problems it causes in the local neighborhood, and have to resolve these problems themselves.  The result is an RPG that feels like ET, The Goonies, and Stranger Things (but without the friendly sheriff who believes the kids).

This is the basis for the “’80s That Never Was” famously (and beautifully) illustrated by Simon Stålenhag and translated into the Tales From the Loop RPG by Free League.  This game was piled with accolades and victory at the ENNIE Awards, and it’s not hard to see why.

And while this game uses the same core mechanic as other Free League games like The Forbidden Lands, it feels extremely different because of how those mechanics are used.  For instance, the kids can’t die.  Instead of losing your hero, your kid will become burdened with conditions that remove dice from your pool, making it harder to roll the 6 needed for success.  Suffer enough conditions and your kid becomes broken and unable to succeed at any roll.  The only way to overcome conditions is to spend some time with your kid’s anchor, another person (who isn’t a PC and is probably an adult) who nurtures your kid and helps get them back on their feet.

The game isn’t about combat; the kids won’t be shooting their way out of problems, or even using crazy mind powers to blow things up.  The PCs are just normal kids, the sort you’d meet every day at school.  The types (classes) include Bookworms, Hicks, Jocks, Troublemakers, and Computer Geeks.  So when they overcome a problem, when they solve an issue, it won’t generally be because they’ve killed someone (or something), but more likely because they’ve found a way to fix a broken thing, or help create a compromise between antagonistic factions, or possibly because they’ve arranged a situation where the adults can’t help but notice the trouble and take control.

This is one of the prettiest RPG books you’ll own, with full-color art almost exclusively by Stålenhag throughout.  It’s got a very clean look as well.  You literally could plop it on your coffee table and your non-gamer friends will enjoy it just for the weird, imaginative art that mingles nostalgia with a sense of wonder.

If you’re a fan of Stranger Things but want a game about the kids and not the adults, or if that mix of creepy, wonderous, and nostalgic in Stålenhag’s art calls to you, and especially if you’re tired of elves and orcs, you’ll want to check out Tales From the Loop.  While the core book gives you everything you need to play (including four linked adventures), the line is supported with additional adventures, custom dice, and a DM’s screen.  Ask the RPG experts at your local Dragon’s Lair Comics and Fantasy® about Tales From the Loop today.