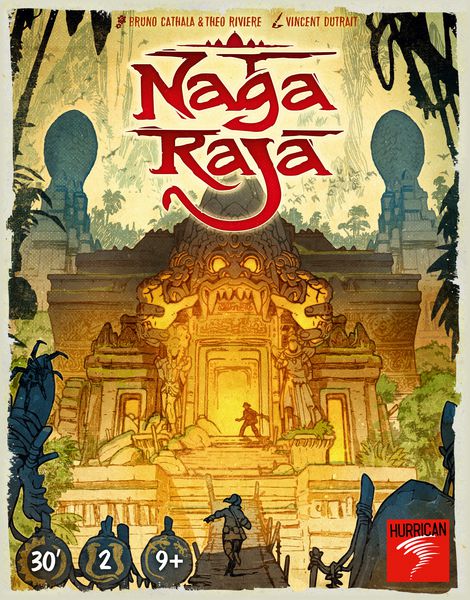 While gathering a large group of friends for a great evening of gaming is often our aim when we break into our game closet, sometimes we’re looking for a more intimate evening with one close friend or special someone.  Thankfully, two player games are becoming more popular.  Naga Raja, from Hurrican, is just such a game.

In this game, both players take on the roll of explorers, each exploring their own ruin and hoping to liberate the treasures within.  You do so by placing hallway tiles on your three-by-three ruin grid, building connections from one of the entrances to the treasure chambers along three of the outer edges.  Each ruin holds nine treasures, but some treasures are dangerous, and best left alone.

You’ll buy these tiles by selecting cards in your hand that share the same family.  These cards will tell you how many of the games unusual four-sided dice, called fate sticks, you’ll roll.  These dice will either turn up fate points, which you can use to purchase the tile if you have the most, or nagas, snake-like symbols that allow you to activate the cards still in your hand.

And here we see the first choice in the game.  Do you spend your cards to roll more dice?  Or do you hold back, in hopes of activating the cards with the dice you roll?  You need to have the highest fate point total to win and place the hallway tile.  But the cards you activate can give you more fate points, move the hallway tiles around, or allow you to peek at the artifacts, or move around your opponent’s artifacts.  And knowing which artifact is which can be important since there are three artifacts that are worth a lot of victory points individually, but will cost you the game if you reveal all three.

The player who did not win the tile draws three fresh cards and looks at them.  They keep two of these cards and gives the remaining card to the other player.  Then play begins again, continuing until one player reaches 25 victory points.

While it is possible to construct a strategy in Naga Raja, luck plays a very important role in what you can do in any particular round.  This means the game will stay exciting even among players of very differing skill levels.  The short playing time of less than 30 minutes means you can get in multiple plays over the course of an evening.  If your gaming library needs a new one-on-one game full of interesting choices and a dash of luck, ask the gaming experts at Dragon’s Lair Comics and Fantasy® about Naga Raja today.