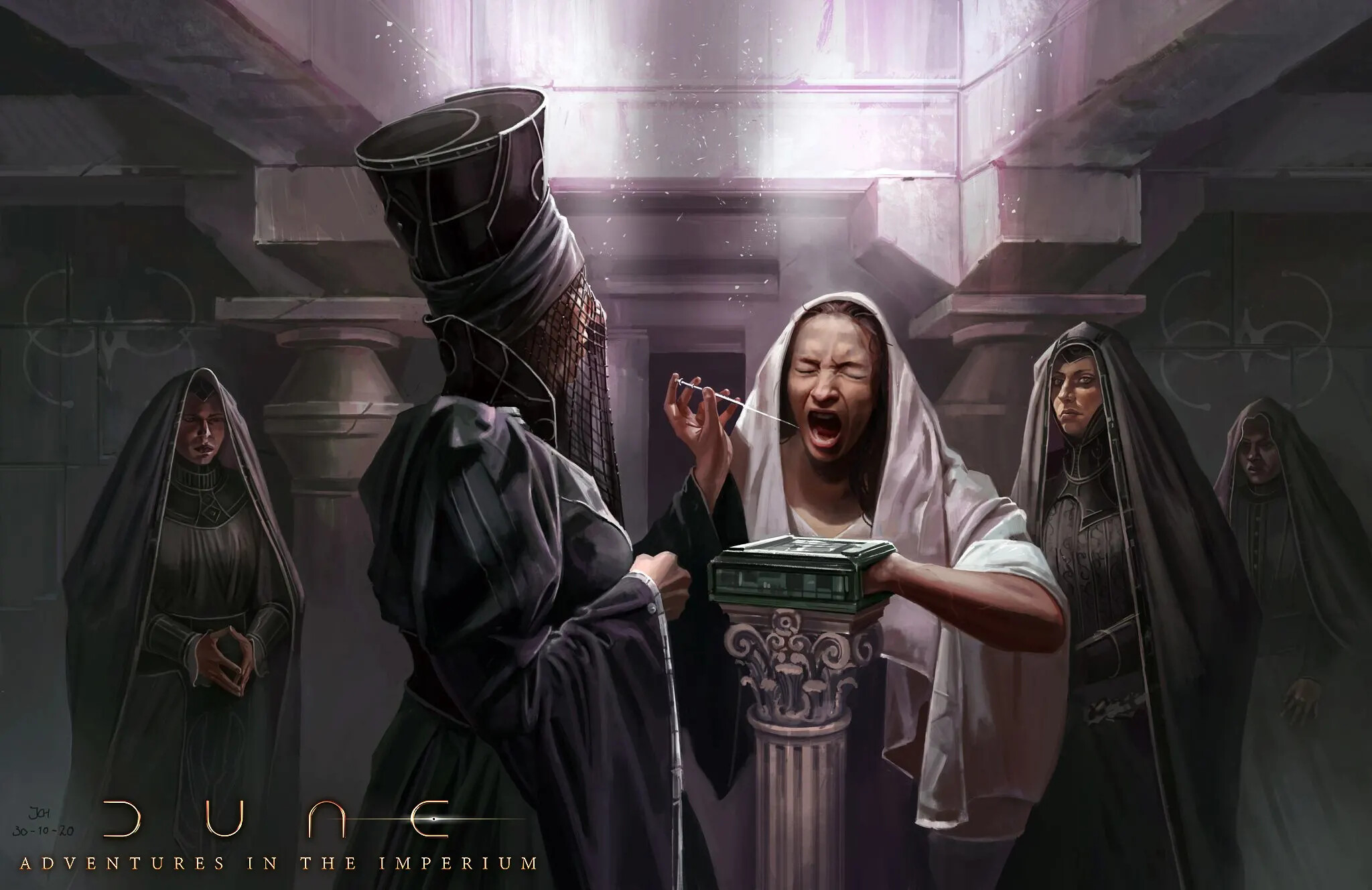 The RPG Spice Will Flow

Dune is the new old sci-fi franchise making itself felt in the worlds of geekdom.  We recently got the classic boardgame re-released, and soon we’ll have a new movie.  If all that wasn’t enough for you, we’re also getting a new RPG, and it’s coming from the capable hands of Modiphius.

If you liked what Modiphius has done with other big-name IPs, like Conan and Star Trek, you’ll likely enjoy this one as well.  We’re getting big production values, which means gorgeously illustrated books, plus dice, GM screens, and player journals.  And we should expect further goodies, like adventures and books detailing the larger universe.

To begin with, Modiphius is focusing on the core experience of Herbert’s first novel published in 1965.  The adventures begin just before House Atreides takes possession of Arrakis.  That means all the big names are still alive, so your characters could possibly meet a young Paul or Jessica, cross blades with Rabban Harkonnen, or find yourselves fleeing across the sands from Jamis and Chani.

Your characters will be the agents of one of the Great Houses of the Landsraad.  These agents can be from many walks of life, from criminals and spice smugglers, to trusted House servants, to swordmasters, mentats, and Bene Gesserit.  You group can pick your House from among those named in the books, but there are also rules for designing your own original Houses.

As with other Modiphius titles, the Dune RPG will use the 2d20 system.  Also like the Star Trek RPG, things have been changed to better reflect the source material.  For instance, dice rolls are based on Skills and Drives.  While Skills are what you’d expect, Drives speak more to the desires, fears, and needs of your character.  This makes why your character is trying to do a thing as important as what they are trying to do.

This also opens the game to two distinct modes of play.  Agent Play is what most RPGs do; you’ll play your characters out in the field, infiltrating guarded places or stealing secrets and otherwise taking on dangerous and daring missions for the benefit of your Great House.

However, as your characters rise in reputation and are trusted with more resources and responsibilities, you’ll get the opportunity to engage in what’s called Architect Play.  This represents those scenes where characters sit around a conference table, moving resources and directing underlings to manage a larger situation that might encompass an entire world, or potentially stretch across the galaxy!  Because of how the mechanics are structured, both modes of pay will utilize the same numbers and dice rolls, making it easy for your group to move between both modes over the course of a single session of play.

Dune: Adventures in the Imperium is in pre-order now but with the movie coming out we expect it to sell rapidly.  If you’re a fan of Frank Herbert’s future history or looking for an RPG experience where your characters’ schemes can ripple out across multiple worlds, talk to the RPG experts at your local Dragon’s Lair Comics and Fantasy® today about securing your copy.