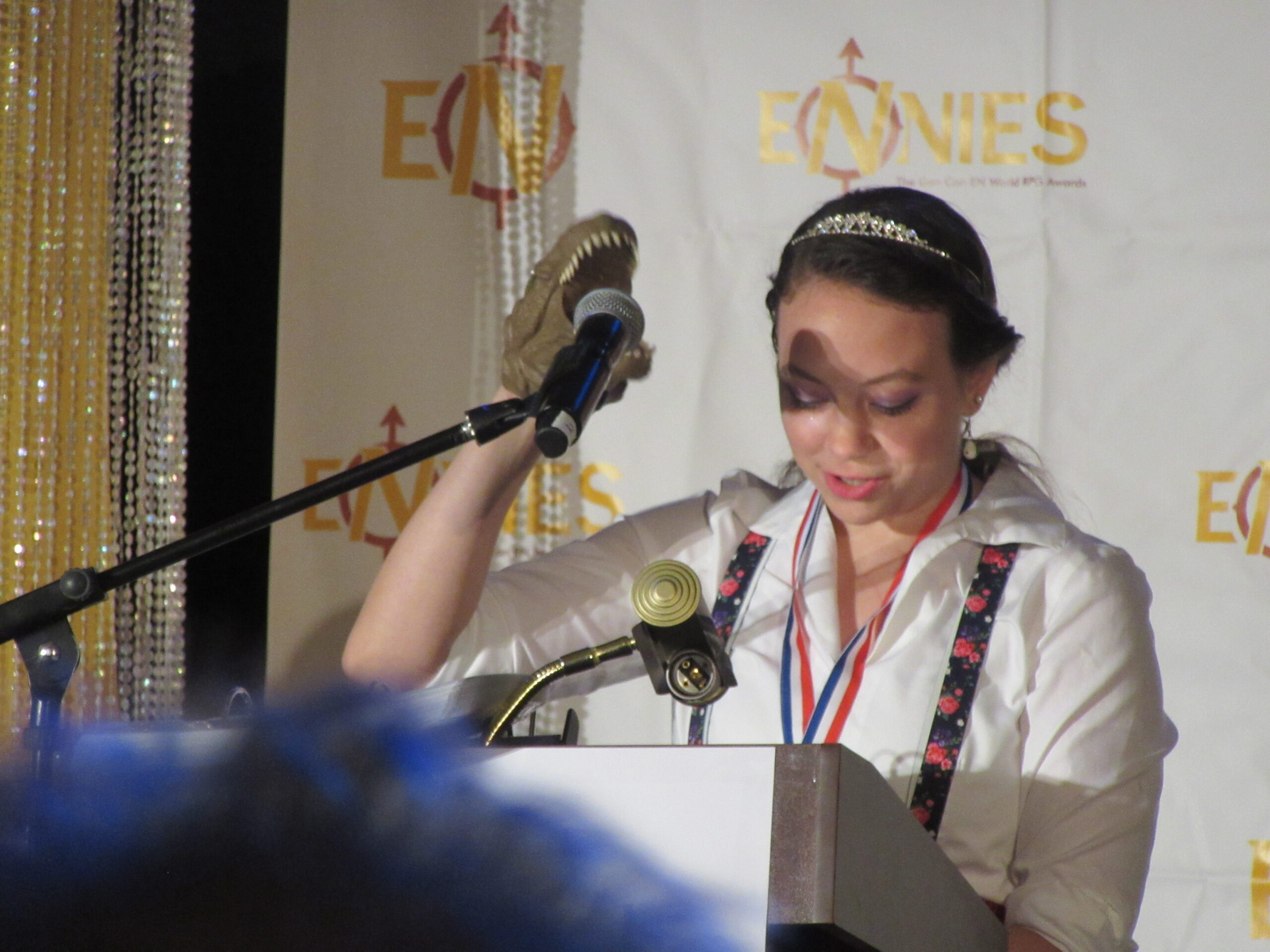 So, con-crud.  It is a thing, and one of the many terrors and vicissitudes your roving report dares when he ventures into the very bowels of GenCon.

So apologies for only now getting around to telling you about this year’s ENnies Awards winners.  For those of you who don’t know, the ENnies are fan-voted from a curated list of the best RPG products every year (sans WotC and Paizo, who have graciously removed themselves for consideration in most categories).  The awards are presented at a ceremony at GenCon every year, and I was quite pleased to see some favorites of Dragon’s Lair Comics and Fantasy® patrons recognized this year.

Let’s start off with local-boy-does-good Jacob Hurst’s Swordfish Islands.  You may recall that their The Dark of Hot Springs Island took home the gold ENnie for Best Adventure last year.  This year, they won Silver in Best Cartography for A New Map of Hot Springs Island, drawn and colored by Jason “Mockman” Thompson, with additional colors by Jumana al Hashal.

The gold ENnie in Best Cartography went to Free League Publishing’s Forbidden Lands.  No doubt, the Legacy-style hex map was a strong factor in that victory.  Forbidden Lands also took home a gold ENnie for Best Production Values, and silvers for Best Rules and Product of the Year.

Dread Lord Cthulhu of course received its due of praise and adoration.  Masks of Nyarlathotep from Chaosium Inc. won gold for Best Adventure while their Call of Cthulhu Starter Set won gold in Best Rules.  Best Cover Art gold went to their Terror Australis 2E (which also picked up the silver for Best Setting, trumped for gold by Cthulhuriffic The Fall of DELTA GREEN from Pelgrane Press).  Cthulhu showered its dark gifts broadly this year, as Golden Goblin Press got a silver for Best Supplement with The 7th Ed. Guide to Cthulhu Invictus and a gold for Best Monster/Adversary was garnered for Sandy Peterson’s Cthulhu Mythos of 5e.  Finally, back to Chaosium, who got the silver ENnie for Miskatonic University: Restricted Collection.

Cthulhu wasn’t the only winner for Chaosium, as the Glorantha Sourcebook scored the gold for Best Supplement and the Best Art, Interior gold ENnie was awarded to RuneQuest: Roleplaying in Glorantha Slipcase.

Finally, we’d be remiss if we didn’t hail Renegade Game Studios’ Kids on Bikes for winning the gold ENnie for Best Family Game.  The silver was awarded to Ardens Ludere’s Dinosaur Princesses.

Be sure to check out all the winners this year; 2019 saw some really amazing stuff being produced.  If you want to learn more about any of these, be sure to talk to the RPG experts at your local Dragon’s Lair Comics and Fantasy® today.