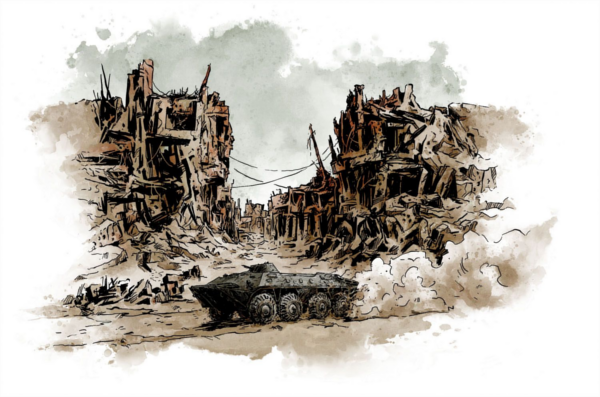 On 17 April 2000, the US Army 5th Infantry Division (Mechanized) was in dire straits.  Shattered by Soviet counterattacks of much greater strength than expected, pushed back nearly to Kalisz, and with no communication with III US Corps and no resupply for days, Major General M.A. Buonagurio declared his division “combat ineffective and incapable of field operations, including defense.”  Giving the command to scatter and make their way back to the German border, his orders signed off with, “Good luck.  You’re on your own now.”

Thus is the stage set for a campaign in the world of the Twilight:2000 RPG.  It’s a game of gritty survival and hex-crawling as you and your fellow lost souls try to survive in a world ravaged by tactical nukes, societal collapse, and the last, gasping attempts by the superpowers to strangle one another.

Those of you who play Free League Press’ other RPGs will find a lot that’s familiar here.  It includes a lot of the exploration of Forbidden Lands with the stress and gritty survival themes of ALIEN.  It also shares a core mechanic with those two games, where you roll dice pools and are able to “push” by rolling additional dice, but at the risk of even more things going wrong.

The original Twilight: 2000 RPG came out in the ‘80s, when a clash between the NATO and the Soviet Union was still plausible.  The current game envisions a world where the Soviet Union did not collapse, and where its military might was strong enough that a clash between the two superpowers resulted not in a sudden erasure of civilization, but a grinding battle of attrition in which both sides collapsed behind the main lines, leaving their armies to contest first without air support, and then without logistical support, until they disintegrated into ragged bands of hungry survivors.  The result is a milieu reminiscent of a 20th century version of the 30 Years War.

The character sheet includes the four stats Free League fans know from their other games: Strength (covering skills like Heavy Weapons and Close Combat), Agility (for Driving and Ranged Combat), Intelligence (which you’ll use to keep the failing machinery of your vehicles and weapons in working order), and Empathy (which covers both Command and Medical Aid).  In keeping with the survivalist theme, the character sheet also keeps track of armor for different parts of the body (head, arms, torso, and legs), stress capacity, coolness under fire, conditions (such as sleep deprivation, dehydration, and hypothermia) and, of course, how much radiation your character’s been exposed to.

You can build your character in two ways.  You can pick an archetype, which is quick and ensures that your characters all start out at about the same relative capability, or you can use the longer, more random, but much more free-form life path system.  Archetypes include the Spook, the Mechanic, the Officer, and the Kid, which gives you some idea of the breadth of the system.  It does not assume that the PCs will necessarily be NATO soldiers (though picking them will give you excellent survival skills and gear); you could be Soviet soldiers, local civilians, or any combination of people you’d care to play.

The game provides maps and scenarios for playing in either Poland (the classic version of the game) or Free League’s home of Sweden.  However, you could theoretically set your campaign anywhere, and they’re promising a lot of support in the future, including playing in the US (perhaps after your crew escapes Europe) or the Free City of Kraków, where, rumor says, the lights are still on and the rule of law is still enforced.

The Twilight: 2000 RPG comes as a stuffed boxed set which includes a 154 page Players’ Manual, a 114 page Referee’s Manual, dice, maps of Sweden and Poland as well as tactical hex maps for combat, cardboard tokens for fighters, vehicles, and conditions, and a deck of cards to help Referees design encounters.  The book of course includes rules for converting between this version of Twilight: 2000 and the three previous ones, as well as rules for solo play.

The Cold War might be over, but it continues to be an inspiring setting for fiction and games.  If you’re a fan of what-if alternate histories, gritty survival, or more realistic post-apocalyptic settings, you’ll definitely want to give this game a try.  Fans of Free League Press who are curious to see what they plan to follow up ALIEN with will also find a lot to enjoy in this boxed set.  Give the RPG experts at your local Dragon’s Lair Comics and Fantasy® a call today to see how you can get your hands on the Twilight: 2000 boxed set.