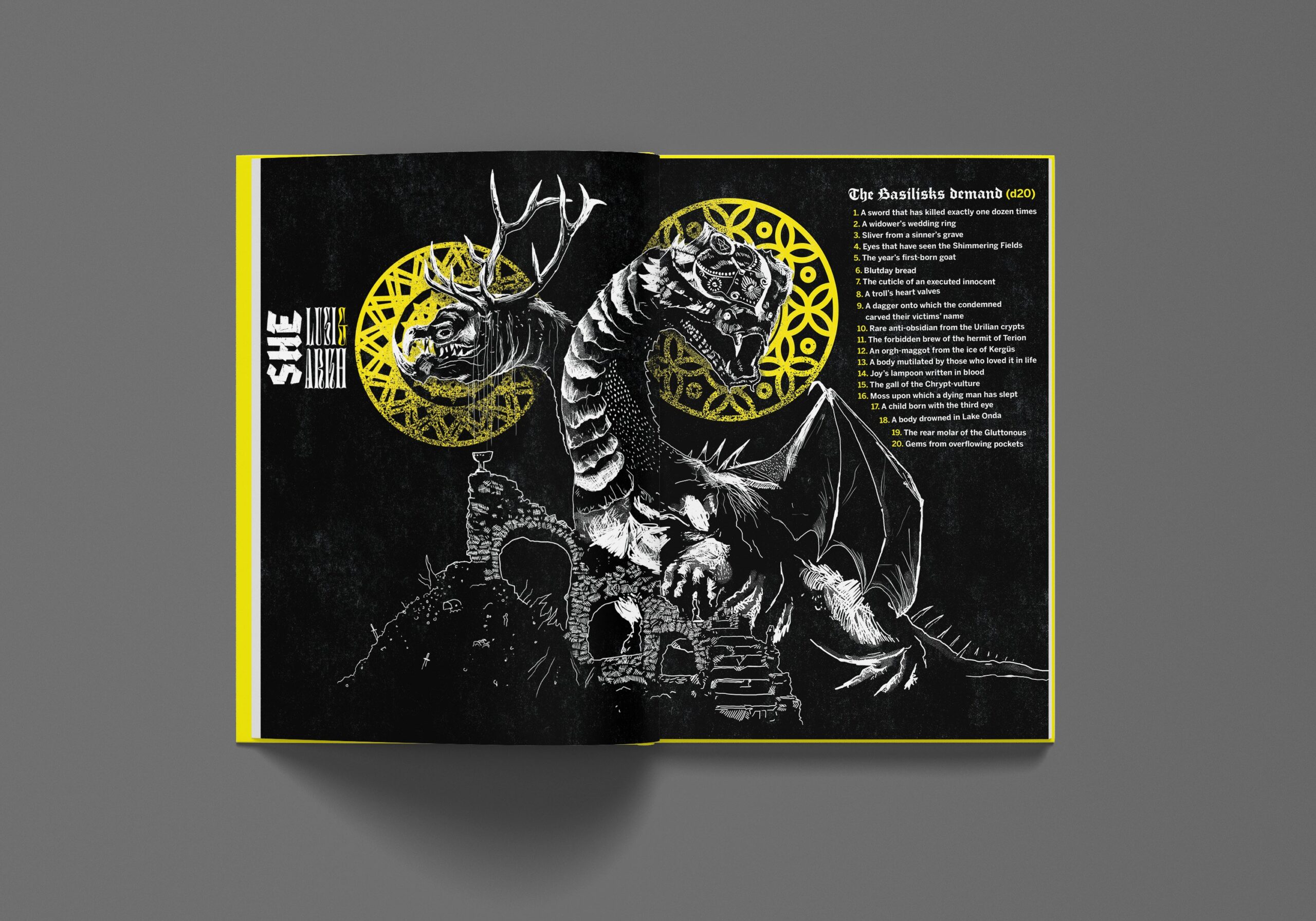 Mörk Borg is billed as “a doom metal album of a game.”  It’s an apocalyptic fantasy RPG with a lot of character.  Notice I said “apocalyptic” and not “post-apocalyptic.”  Mörk Borg, published by Free League Publishing (the same folks who gave us Tales From the Loop and The Forbidden Lands) and designed by Ockult Örtmästare Games, is about the end-of-days of a fantasy world.  A pair of mystical, two headed basilisks have become the center of religious devotion.  One of the heads of one of the basilisks, Verhu, “predicts inexorable annihilation and, since he’s always right, has become utterly full of himself… Verhu loves his position and hungers for temples to be raised in his name.”

Alas for poor Verhu, but the world in which he dwells is doomed.  How doomed?  That’s something to decide at your Session Zero for this RPG.  At the dawn of every day, the GM rolls a die.  If that die comes up a 1, they then roll a d6 to see which calamity befalls the world next.  Each day leading up to the seventh (and final) calamity has a table of six options, arranged in style (both in terms of how they’re written and their aesthetics) like a religious psalm.  On the final, and seventh day, the world is destroyed, the campaign ends, and the game literally suggests you burn the rulebook.

Which die the GM rolls depends on the group’s choice.  Options range from a d100 (“Years of pain”) to a d2 (“The end is nigh!”).  This has powerful consequences for how the game is played.  Like most RPGs, Mörk Borg expects the PCs to rest periodically to replenish their mechanical resources.  Imagine what would happen to your D&D game if, every time you took a full rest the DM rolled a die that could bring the entire game world one day closer to annihilation!

The game has a very old-school feel, with you rolling randomly for your character’s attributes and starting gear.  And characters are designed to be fragile.  They’ll lose eyes, have limbs broken or lopped off, get devoured by Verhu, or even explode “in screaming black fire in which the faces of the dead are seen.”  (And, of course, “Water only feeds this fire.”)  Dying in weird and wondrous ways is part of the fun here.

Characters have four stats: Agility (governing how they defend against attacks and how well they flee peril), Presence (covering both their awareness as well as their charm and ability to wield the strange magics of this dying world), Strength (what it says on the tin), and Toughness (your ability to resist extreme temperatures and poison or survival a fall).  These range from -3 to +3 and you’ll add them to d20 rolls to see if you succeed.

Mörk Borg, like the Cypher System, is one of those RPGs where the players do most of the die-rolling.  For instance, if a monster attacks a PC, the player rolls to see if they avoid attack, rather than the GM rolling to see if the attack hits.  This leaves the GM free to concentrate on running the game and managing the setting and NPCs.

Unlike most RPGs, when you level up (based on the GM’s choice, though a milestone-like system is suggested), you reroll all your stats.  If a stat was at +1 or less, it automatically goes up by 1.  Otherwise, if you roll better than the stat, you increase it by 1, and if you roll worse, then you lower it by 1.  Yes, “leveling up” could very well mean that your character gets mechanically worse!

And that right there should tell you if you’ll enjoy Mörk Borg or not.  If you’re the sort who frets about GMs abusing their power and being jerks to the PCs, Mörk Borg is not for you.  On the other hand, if you relish the sort of crazy, character warping shenanigans of Blood in the Chocolate, run, do not walk, to your local Dragon’s Lair Comics and Fantasy® to ask how you can get your hands on this game.

What, you want more?  Ok, how about this: if a goblin wounds you, and you fail to kill it within d6 days, you’ll transform into a goblin yourself, becoming “a ruined mind watching its body-prison perform terrible deeds.”  The optional character classes include the Fanged Deserter who might wield the horseshoe of Death’s horse, a Gutter-born Scum armed with blinding, diseased phlegm, or an Occult Herbmaster able to brew deadly poisons and odd soups.  Being an old-school style game, Mörk Borg includes potential followers, including alien Pale Ones with powerful abilities but who might want the PCs to join them in obscure rituals, or a lamp-headed Wild Wickhead eager to listen to the PCs bicker and argue.

Mörk Borg is very rules-lite, but heavy on style and swagger.  The production values on this book are amazing.  Turn the page and you’ll see a completely different aesthetic style, from pseudo-religious to artsy punk fan-zine.  The end papers are loaded with useful charts for the GM to roll on (things like d10 occult treasures, name tables, and rules summaries on things like how to roll reaction and morale checks).  There’s original art by Johan Nohr but also, as credited on the cover, “dead people,” including medieval woodcuts and Francis Danby’s “The Deluge.”  Inspect the spine carefully and you’ll see that, painted in raised yellow characters between the letters of the title is a reference to “psalm VII,” the world-ending prophecy of the setting.

And that’s rather Mörk Borg in a nutshell: it’s a quirky, odd little game that delights in subverting your expectations, shocking and delighting you with its playful (and sometimes gross) irreverence, that doesn’t take itself too seriously, but pays careful attention to the details that help you craft a unique gaming experience.